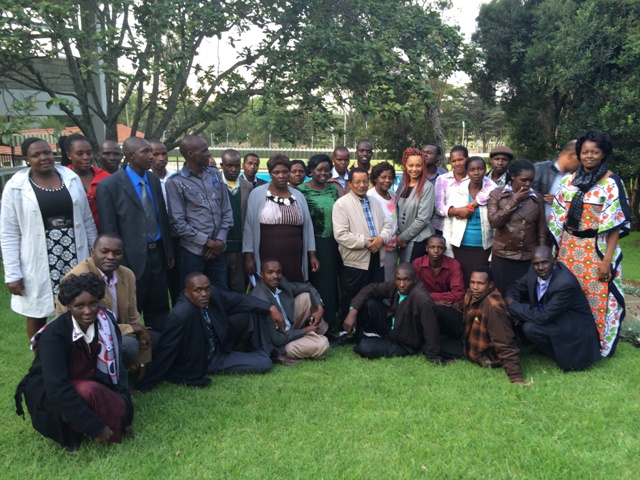 Photo of community leaders after an FGM/C training.Female genital mutilation/cutting (FGM/C) encompasses all procedures that involve partial or total removal of the female genitalia, and/or injury to the female genital organs for cultural or other non-therapeutic reasons. FGM/C is practiced globally by ethnic groups in 30 African countries (East, North East, and West Africa), Middle East, and Asia, and in Latin America and Western nations among immigrant populations. FGM/C is a cultural practice with no positive side. It frequently has disastrous consequences for the health of women and children. Momentum is building all over Africa for the abandonment of FGM/C, and in many countries it is now illegal.

The Africa Coordinating Center for the Abandonment of FGM/C (ACCAF) is leading the way to elimination of FGM/C and improving health outcomes for women and children in Africa and the Middle East. Hosted at the College of Health Sciences at the University of Nairobi, ACCAF has worked for 15 years with African and global partners to accelerate the process of elimination and to highlight ongoing need for action. ACCAF has a variety of partners, including UNFPA and UNICEF, DfID, WHO, UN Women, the Universities of Sydney and Ghent, the Population Council, and many other stakeholders. ACCAF has regional hubs in Burkina Faso, Egypt, and Kenya.

Between 2012 and early 2017, the USAID-funded, JSI Research & Training Institute, Inc. (JSI)-managed Advancing Partners and Communities (APC) project provided US $430,000 to ACCAF to undertake advocacy, media campaigns, and community mobilization; build capacity of service providers and community champions to advocate abandonment; and to research an emerging problem in northern Kenya, where members of the Kipsigis tribe cut adolescent girls. During the post-election upheaval in 2007/8, communities in this region were among the hardest hit by violence. Men volunteered to be warriors, but if their wives were not cut they were sent away from the action and humiliated. This led to the reemergence of the practice because women who were not cut were considered an omen that led to the communities’ defeat during the war. Thereafter, many married women were compelled to undergo FGM/C. With APC funding, ACCAF staff trained more than 200 Kipsigis elders, youth, church leaders, provincial administrators, women leaders, and traditional practitioners on the dangers of cutting, and to convey this to their communities. In all, 2,500 community members were reached in meetings, rallies, schools, and churches. Community feedback was positive, and many champions were recruited. ACCAF went on to work with other tribal communities.

ACCAF’s efforts among the Kipsigis and other tribes in northern Kenya show that working with multi-disciplinary teams of people who have legal, gender, medical, anthropological, social, and psychosocial expertise is critical for achieving success in efforts to abandon FGM/C, and that communities and leaders must be engaged at every level.