CEPROSH Clinic Opens its Doors to Trans... I Feel Free in Here 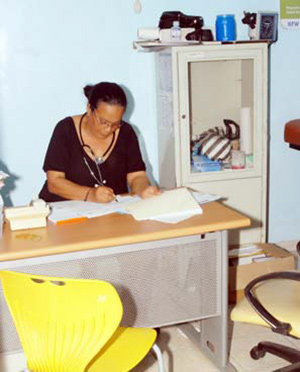 Health provider Dr. Sonia Ramirez at the CEPROSH clinic before seeing a patient

Macarena Perez, a trans woman and patient at the CEPROSH health clinic in Puerto Plata, 300 kilometers north of Santo Domingo, shares her grief after her best friend died of AIDS three years ago. “I keep thinking how different it would have been now, with the USAID/APC project. I would have brought her in myself, here to CEPROSH’s HIV clinic service, to be treated.”

In the Dominican Republic, the transgender community lives in a hostile environment of hate and rejection. Transgender persons are subject to horrifying hate crimes that mostly go unpunished. They are not only victims of physical assault but also of other civil rights violations such as discrimination in their place of employment and education. Transgender persons also experience poor access to health services, because they are non-existent or because they have to endure mistreatment, rejection, and abuse at public health facilities. However, at the CEPROSH clinic, trans women who are diagnosed with HIV receive clinical care, ARV treatment, and psychological support. They also receive social and economic support services including technical training through inter-institutional alliances.

As part of the USAID-funded Advancing Partners & Communities (APC) project, CEPROSH—a leader in HIV/AIDS awareness, prevention, and treatment services—partnered with TRANSSA, a trans advocacy and community-based organization, to work towards improving the accessibility of health services for the trans population in the northern part of the country. As a result of their collaboration, there has been a significant rise in demand for health services from the transgender community—18 percent of new patients seen at the comprehensive care program of CEPROSH’s clinic are trans women. Macarena, who volunteers with TRANSSA and CEPROSH, believes that the increasing number of trans women seeking services at the clinic is due to the promotion of the health services that the clinic offers among the trans community such as education activities, accompanied referrals (peer-system), and the compassionate and personalized care offered by the clinic staff.

“It is easier for trans now to go to the clinic because they trust the people at CEPROSH and they know that they aren’t going to be mistreated, but also because through TRANSSA’s activities they’ve learned that the clinic is not exclusively for people with HIV.”

Health providers at the CEPROSH clinic have participated in sensitization workshops learning how to make the trans community feel welcome. Christian King, Director of TRANSSA, said that “part of the sensitization workshops focus on portraying trans as people who have emotional and health needs and who do not deserve to be discriminated upon.” Trans women who attend the CEPROSH clinic do not have to fear the perception—and the resulting stigma—of seeking HIV services since the clinic offers other services as well, a factor that appeals to the trans community.

TRANSSA, responsible for educational activities with the trans population, has reached 118 trans women with peer outreach during the first six months of this project, surpassing the initial target of 60. The size of the trans community was initially unknown but the activity attracted a large turnout—the organization found itself scheduling more activities to accommodate trans women from Puerto Plata as well as from nearby provinces. King attributes the high number of attendees to the fact that Puerto Plata is predominantly a tourist destination that generates sources of employment drawing in trans women, many of whom are sex workers who are now accessing services for the first time through peer outreach and referral to CEPROSH.

King identifies that one of the challenges for organizing the trans population is the violence against trans women. Over 20 crimes against transgender sex workers have been registered by TRANSSA since 2006. In November 2014, Kimberly Sody, a transgender sex worker was brutally attacked by her client at a Santo Domingo hotel. Kimberly’s injuries were fatal— she was unable to recover from the resulting coma. Members of the community protested against this gruesome hate crime.

Another challenge faced by TRANSSA is the HIV and STI prevalence in Puerto Plata. According to data from the PLACE study, prevalence of HIV is 18 percent and syphilis is 21 percent among the trans population, about 20 times the rates in the general population. According to data from the 2012 Biological and Behavior Surveillance Survey, carried out in Puerto Plata, 49 percent of the transgender population reported discrimination and exclusion due to their gender identity. Over 18 percent of transgender persons reported discrimination in employment and 12 percent rejection by health providers.

Empowerment and community are key components to the success of the clinic. King affirms that “Thanks to this program, the leadership in Puerto Plata is stronger, as well as solidarity among members within this community, which it was not the case before this project. We were able to become more unified and to reduce the levels of self-stigma, an important step forward for trans women to start participating in activities and to make it all the way through to the steps and into CEPROSH’s clinic.” As members of the community learn that trans women should be treated with dignity and respect, stigma and discrimination decreases creating an environment where trans women feel appreciated and cared for. For Macarena and for many other trans women the CEPROSH clinic “has opened its doors to trans. Here, I feel free, this is a place where you can feel free, because we can be the way we are and no one questions us, we are accepted, since they have qualified personnel and there is an environment of respect.”