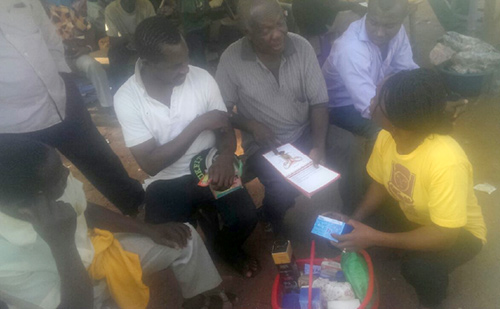 Peace Amegadzie holding discussions with drivers at a station in Ashiaman.

“After completing my training as a Health Keeper, it was very difficult starting the business,” said Peace Amegadzie, a health worker in Ghana. “In my area, Kasoa Amanfrom Top Town, I am the only Health Keeper left. All my colleagues have quit, because they thought the business was not going to succeed. Some had the perception that selling condoms was evil and that it promoted promiscuity among the youth. I was disturbed but I decided to persevere and now I can say that I have made progress.”

According to 40-year-old Mrs. Amegadzie, her childhood aspiration was to become a fashion designer, but she has still not regretted switching. As a health worker, she is helping people to improve their health and it has also kept her employed and able to support her family.

One Tuesday in 2012, Mrs. Amegadzie was informed by a friend about a community-based family planning program in the area. “When we went, it was HealthKeepers Network that had come to recruit volunteers. They organized a three day training workshop for us particularly on reproductive health, family planning, and other health related issues.”

"All my colleagues have quit, because they thought the business was not going to succeed. Some had the perception that selling condoms was evil and that it promoted promiscuity among the youth. I was disturbed but I decided to persevere and now I can say that I have made progress."

Despite the difficulties involved, Mrs. Amegadzie said her work had impacted others and her life so well that she can now boast of making proceeds from the sale of health protection. She mainly carries out her work in two areas: Kasoa in the Central Region and Ashaiman in the Greater Accra Region. She said communities in these areas also lack access to safe drinking water and this has caused a sharp rise in demand for Aqua Tab, as her customers depend on it to treat their water.

According to Mrs. Amegadzie, despite people’s strong mythical beliefs against the use of condoms, she continues to educate people on its use and is making profit from its sales.

“I started with GH5.50 and now I can boast of increasing my margin to over GH300 worth of products. I move from house to house to educate people, and when I am able to convince them, I sell them the products. They have been responding positively, I must say, education and proper communication have always been the key factors I have adopted in promoting the products I sell. Language barrier has never been a problem since I am always able to maneuver my way through, especially with my training as a Health Keeper.”

Through her dedication and hard work in her community, Mrs. Amegadzie disclosed that she has been selected by the senior community Nurse in the area to be a volunteer for a Cholera and Ebola campaign on a UK Aid program.”

Mrs. Amegadzie believes that being health worker requires one to be caring and as a result requires one has to apply tactful approaches, especially in dealing with clients and their information. She has also gained respect and recognition from the work she is doing. “Most of my customers come back to me regularly each time they need health products or have a health problem.”