Scaling Up the HIV Response in the Dominican Republic

A Strategy To Link Public and Private Entities To Increase Access To HIV Prevention, Care and Support Services For Key Populations 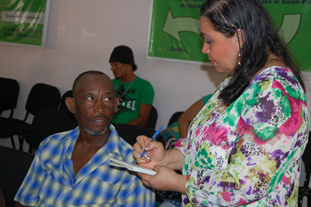 Regional Health Service personnel going over the satisfaction survey with a patient in the Hospital Doctor Antonio Musa, in San Pedro de Macoris.

When the Advancing Partners & Communities (APC) project approached Dr. Elsa Valdez, Manager of the Region V Health Service (SRS) in the Dominican Republic, with a strategy to positively affect key populations through changes in the regional health system, the idea resonated with her. Key populations in the Dominican Republic have HIV prevalence rates that are six to twelve times higher than the national average of 0.8 percent. Health Region V, located in the eastern region of the country, is not an exception. Although there are multiple players committed to tackling the concentrated HIV epidemic, large gaps in coverage and access to HIV prevention, care and treatment services remain.

APC proposed a strategy to the SRS and committed individuals from the APC team in the east, to lead a partnership with civil society organizations in order to reach a common goal: scale up the HIV response for key populations, with quality services and human rights for the most marginalized groups. Dr. Valdez stepped up to the challenge and started working with APC to implement the action framework for an expanded and comprehensive response. The framework would serve as a pilot for coordinating and mobilizing resources to deliver an articulated response to the HIV epidemic in Health Region V. In the initial phase of the pilot, members of key populations, service providers, community-based organizations (CBOs), and government officials met to prioritize the main areas they wanted to address. Five working groups were formed: quality of services, reducing stigma and discrimination (S&D), ensuring referrals, multisectoral coordination, and monitoring and evaluation (M&E). The five groups then carried out situation, response, and gap analysis before forming an action plan to address priority gaps.

Achievements in the Quality of Services
Through this pilot "we have been able to strengthen the communication channels with community groups and civil society organizations through collaboration, while keeping in mind that the main goal is to reach key populations—female sex workers (FSW), men who have sex with men (MSM), and transgender persons (TGs)— in a holistic manner," reported Dr. Valdez. The pilot has been well received by the community and clinical service providers alike, due to Dr. Valdez' leadership and her teams' commitment to result.

Some of the sites participating in the pilot are already showing promising results. A hospital that operates in El Seibo followed an action plan based on user satisfaction surveys, adherence to antiretroviral treatment (ARV) measurements, and compliance with the quality assurance standards from the HIV/AIDS national guidelines. Since implementing the action plan, the hospital has instituted practices to better serve its beneficiaries, including same day processing of HIV tests, an increase in lab personnel, and a decrease in average waiting time for patients.

Achievements to Tackle S&D
The pilot has also facilitated participation from key population members to address different issues. According to Dr. Valdez, "implementing the framework has given us the opportunity to have face-to-face discussions with members of key populations to define strategies that would guarantee their participation in prevention, care, and support programs."

The key population members were trained as facilitators to create an open dialogue that would lead to sharing best practices, evaluating mechanisms to report harassment, and identifying corrective actions.

As a result, SRS along with other major players designed and implemented an APC supported model to prevent S&D at the service level. Eight health centers (six public and two NGOs) trained personnel in S&D and established anti-discrimination policies. Each center now has an established mechanism to denounce cases of S&D against members of key populations.

"The workshops are helping to change attitudes. If attitudes change, the demand for health services among key populations will rise."

For Lupita Raposo—a transgender woman who facilitated the training in reducing S&D among health providers—participating in regional decision-making has been "a major life event." As a health worker herself, Lupita has witnessed a sense of empathy and awareness in the hospitals where she has facilitated the S&D reduction model. Lupita firmly believes that "the workshops are helping to change attitudes. If attitudes change, the demand for health services among key populations will rise." After all, S&D is one of the major obstacles faced by key populations when trying to access health services.

The anti-stigma and discrimination activities at the service sites are complemented by other activities involving the police and government partners. ADOPLAFAM, an NGO and APC partner has been leading these activities. "We have been able to include different actors from the community to design a code of conduct and an action plan that protects vulnerable populations," explains Máximo de Jesús, a program coordinator for ADOPLAFAM. Short and long term actions were identified for anti-violence approaches, rights and duties, and to establish alliances by promoting dialogue between key populations, the police, and the regional prosecutor's office.

"For the first time we have been able to have regular discussion of targets, data analysis, and corrective actions in the region."

Achievements in the Area of M&E
The M&E working group developed a tool to harmonize data collection from various organizations, in order to analyze information from multiple projects and provincial programs. To date, all management personnel from the centers that are participating in the pilot have been trained in using data for decision-making. They have used the M&E tools to monitor and give feedback to their respective centers on the action plans. Máximo de Jesús affirms that "for the first time we have been able to have regular discussion of targets, data analysis, and corrective actions in the region." The next step is to implement the use of the Routine Data Quality Assessment tool (RDQA) to improve the quality of the data collected at the centers. APC will be providing region V with technical assistance for the implementation. 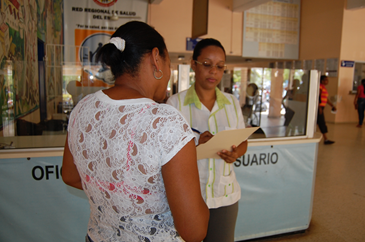 Regional Health Service personnel going over the satisfaction survey with a patient in the Hospital Doctor Antonio Musa, in San Pedro de Macoris.

The efforts to promote multisectoral coordination and social inclusion across Health Region V have gained momentum. Dr. Valdez affirms that embracing the framework has helped stakeholders form and strengthen alliances to address the unmet needs of at-risk populations in the east. "We know that it is possible to control the HIV epidemic and to achieve a better quality of life for people living with HIV in this region. I am convinced that this will only continue to be possible through an intervention such as the adoption of the framework that allows us to join our efforts and resources."

The framework has facilitated effective communication between stakeholders who will influence the decisions at the regional, provincial, local and national level. In addition to implementing the framework, the SRS has been able to identify a range of needs by adopting best-practices from the APC project, such as collecting baseline data in different areas. "We developed a satisfaction survey to be filled out by patients who receive HIV services in all 14 hospitals throughout the region," says Dr. Valdez. "We also implemented a tool developed by an APC international technical advisor to measure adherence to HIV treatment," a tool that the regional health service is also planning on using to measure adherence to other treatments such as TB.

There is still a lot of work to be done. Some of the major challenges are the development of a referral and counter-referral network across the region, the real-time integration of programmatic data generated by the different projects for evidence-based decision making, and the pooling of technical expertise. Addressing these challenges will ensure reduction of HIV transmission in key populations and the general public.

Going forward, the SRS will continue implementing the action framework for an expanded and comprehensive response, by overseeing the working groups and continuing to align stakeholders' efforts. Region V's achievements are inspiring to other regions. The Ministry of Health is in the process of replicating the framework and drawing from the lessons learned.