APC in the Dominican Republic FY16

Jump to sections on:

APC's goal is to contribute to a sustainable reduction in HIV transmission among key populations and to promote an improved quality of life for people living with HIV.

In the Dominican Republic (DR), APC serves populations with the highest HIV prevalence by expanding coverage and improving the quality of HIV-prevention, care, and support services.

By partnering with local organizations, APC has been able to reach key populations–female sex workers, men who have sex with men, and transgender persons–as well as priority populations such as clients of sex workers and batey residents.

In 2016, APC has continued to build on the success of fiscal years 2014 and 2015 through technical assistance and support provided to 22 local organizations and public hospitals.

During the first semester of FY16 (October 1, 2015 through March 31, 2016), APC partners continue reaching members of key and priority populations with community-based HIV prevention. 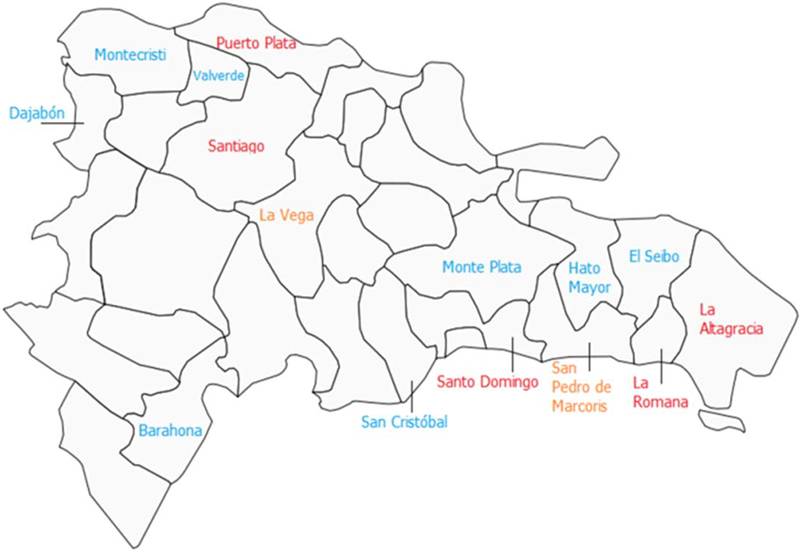 Provinces in the Dominican Republic in which APC worked during FY16

APC partners also accompanied key and priority populations to HIV testing and counseling HTC services, linked people who were diagnosed as HIV-positive to care, and improved the adherence of patients in antiretroviral therapy.

I was treated with respect by the doctor and other staff at the clinic, and the counselor helped talk me through my fears about getting an HIV test... When I received my results, we talked about what I needed to do to stay HIV-negative. I wanted to make sure my friends got the same information.

APC is committed to improving access to a comprehensive package of HIV and sexually transmitted infection (STI) prevention, treatment, community care, and support services for key and priority populations.

For me, it was important that the person who contacted me assure me that the test is confidential and if the result was positive, COIN would provide me with ongoing care and support.

-Amalis, a sex worker who was introduced to HIV testing through the APC's grantee Center for Comprehensive Orientation and Investigation's (COIN in Spanish) mobile clinic. 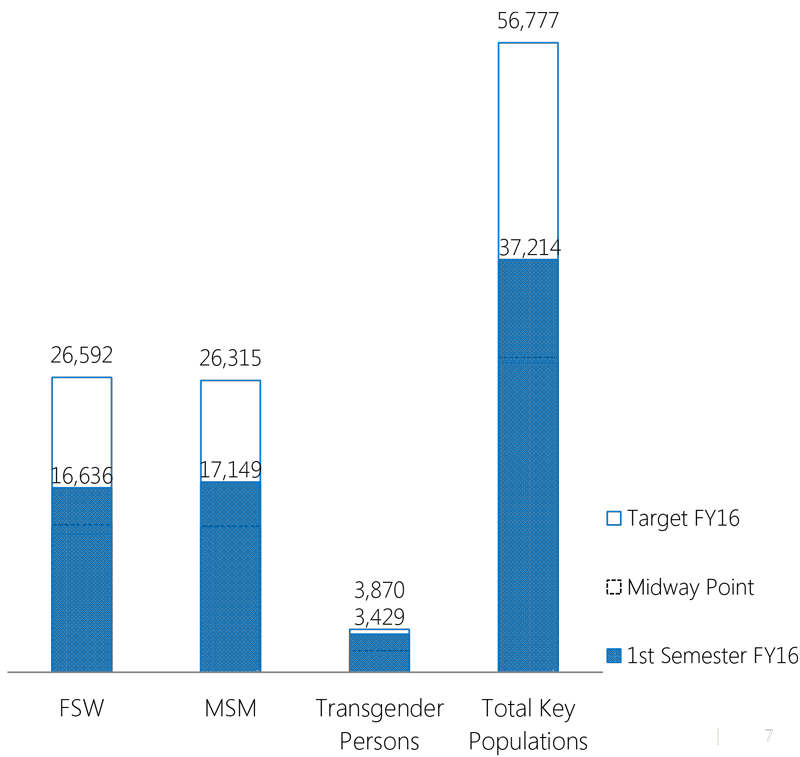 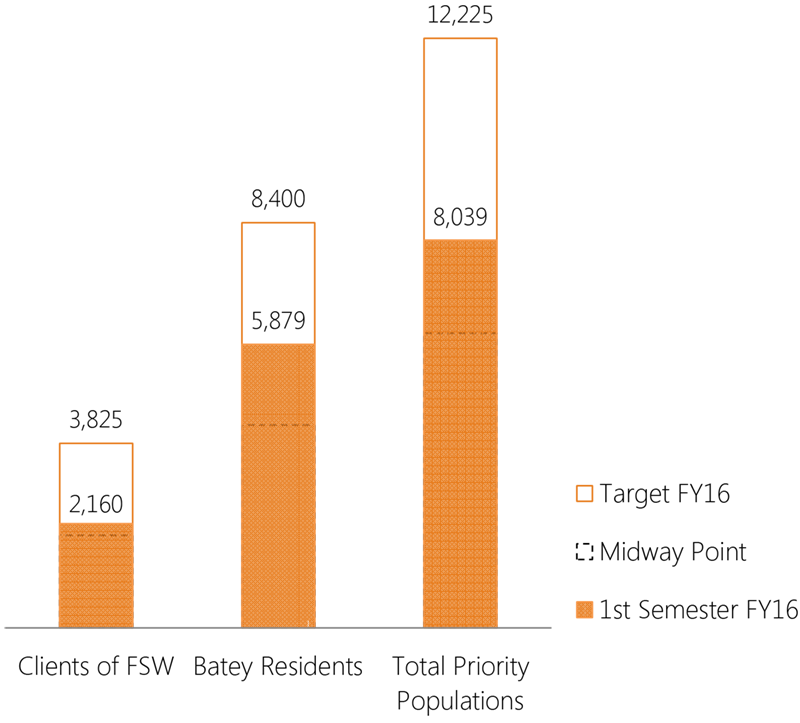 Referrals and counter-referrals to HIV testing and STI treatment services are essential components of APC prevention activities. The referral system ensures the timely diagnosis of HIV in key and priority populations, immediate entry to comprehensive care services at APC clinics and public sector hospitals, and access to treatment for STIs identified in these health centers. During the first semester of FY16, APC partners made 15,038 referrals to these services (64 percent of the FY16 target). The highest numbers of referrals were for HIV testing. Of all referrals, 97 percent were counter-referrals.

Distribution of Condoms and Lubricants 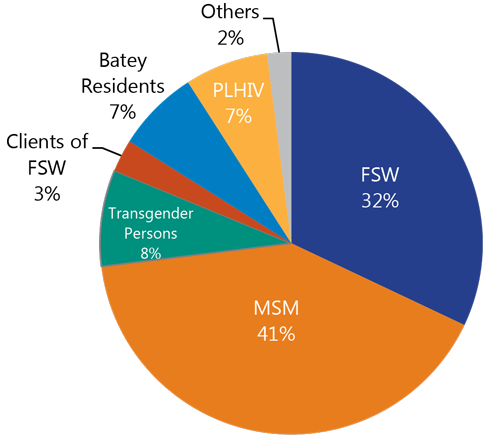 Knowing one's HIV status is essential to preventing the spread of HIV and accessing counseling and medical care.

HIV testing and counseling (HTC) is the first link in the 90-90-90 PEPFAR strategy, as it allows early entry of people with HIV-positive diagnoses to comprehensive care and antiretroviral treatment. 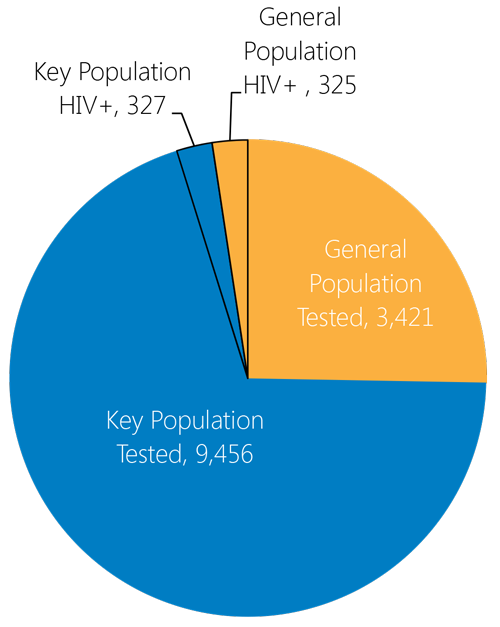 Care and Support for People Living with HIV

Clinical care services and community support are essential for people diagnosed with HIV.

A variety of approaches–enrollment and retention in service, ensuring early access to ART, etc.–help PLHIV have a better quality of life. These services are part of a continuum of care offered from the time of initial HIV diagnosis, prior to and during ART, to end-of-life care. APC-supported care and support includes clinical, psychological, social, spiritual, and prevention services designed to increase retention in care, maximize functional ability, and minimize morbidity.

Ever since I came to IDEV six months ago, everyone has treated me well. I remember that during my first appointment, they asked me the first thing that came to mind when I heard the term HIV and AIDS, and I said, 'to try to overcome this problem', but If I were asked the same question today, I would answer, 'HIV is not a death sentence, but a chance to live.'

2,540 PLHIV (64 percent of target) were reached through community health promotors who offer services in 14 provinces. These services focused on retention, recovery of those considered lost to follow-up, and adherence to treatment. This was achieved through close coordination between APC-supported clinics that offer health services and the HIV comprehensive care clinics at public hospitals. In addition, during this reporting period, 529 of 2,196 PLVIH who had dropped out of care were recovered at 14 health centers. This represented recovery of 24 percent of the dropouts recorded at the beginning of the year. 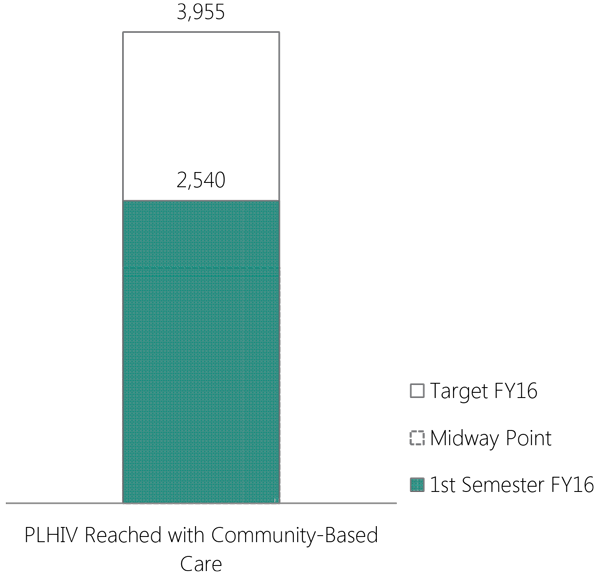 Antiretroviral therapy (ART)
The number of patients on ART enrolled at the seven APC supported clinics represent 19 percent of the total PLHIV on ART in all 76 comprehensive care clinics (SAIs in Spanish) in the country. 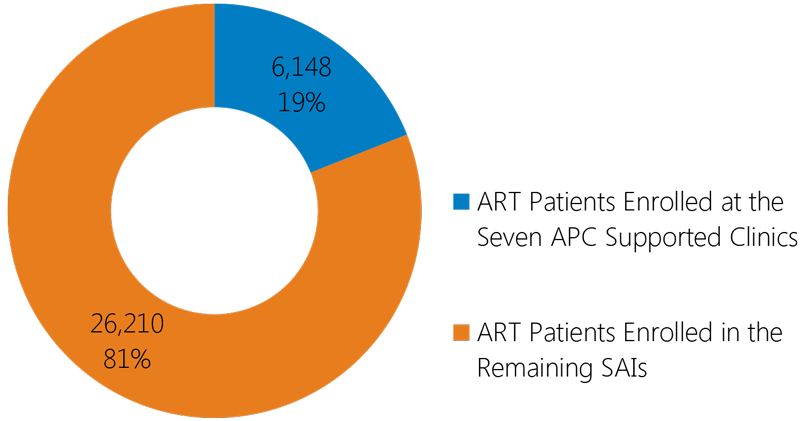 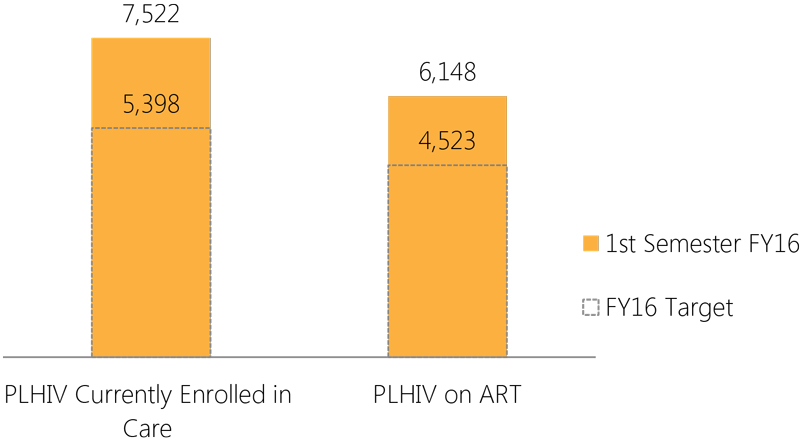 During the first semester of FY16, APC through its partners referred and/or accompanied PLHIV to HTC services in public sector hospitals and clinics. Some were newly diagnosed at HTC community events. A total of 377 PLHIV were enrolled in HIV clinical care at 10 public hospitals and one nongovernmental organization (NGO) clinic.

The FAPPS reported 7,789 PLHIV currently enrolled in care in the 10 SAIs that receive technical assistance from APC grantees. These SAIs reported 6,018 patients on ART, representing 77 percent of the total number of patients enrolled in care. 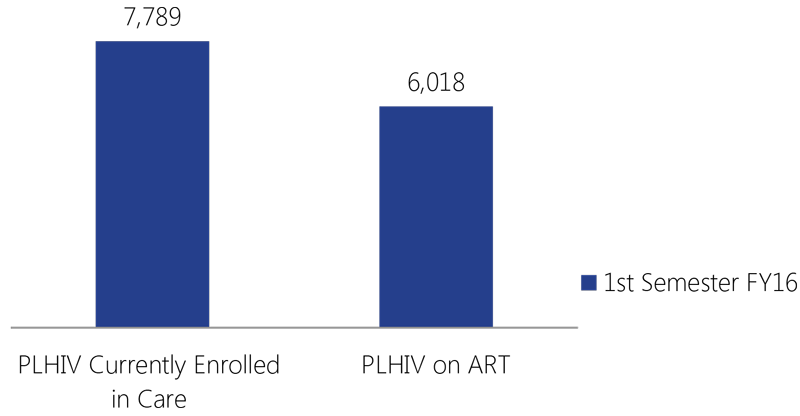 The HIV treatment cascade is an essential resource for monitoring the number of people who receive HIV services at clinical sites.

The cascade illustrates the progress of a person who is receiving HIV services through every stage of treatment before s/he achieves viral suppression. 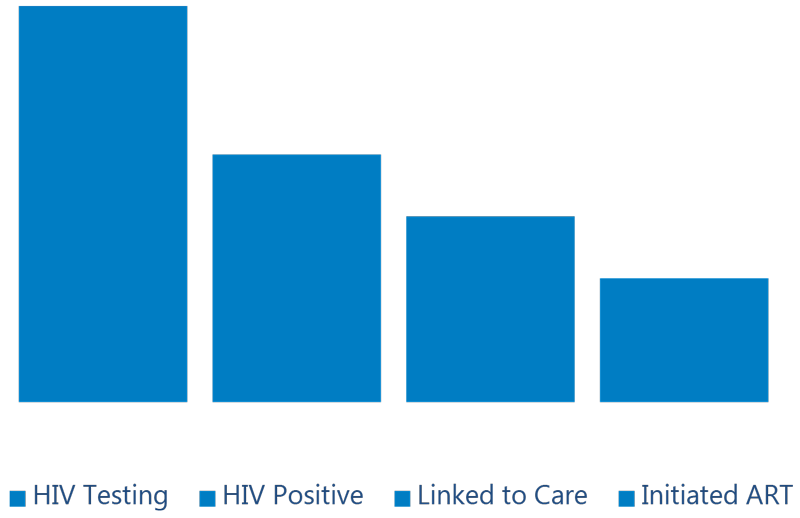 The treatment cascade begins with the HIV test and the delivery of the results. The next stage is linking people who are positive to care, which includes clinical evaluation, periodic CD4 and viral load measurements, and other services. Once a patient is enrolled in care, the effectiveness of the treatment depends on the patient remaining in care. Adherence to ART is closely associated with viral suppression; if an ART patient adheres to treatment (≥95 percent), the probability of achieving viral suppression will be higher. 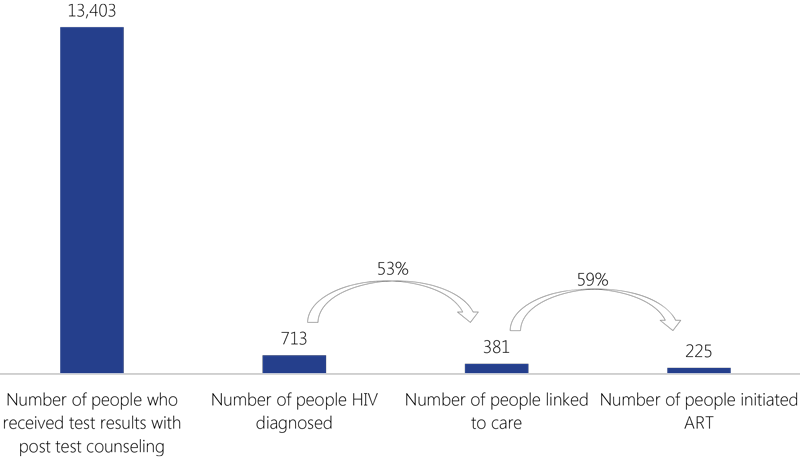 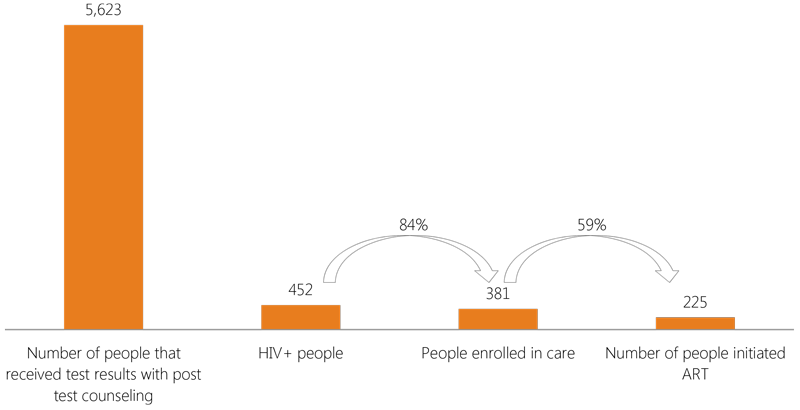 Adherence to treatment helps prevent drug resistance and helps patients reach an undetectable viral load, which improves quality of life and lowers the probability of infecting others.

APC began studying adherence of patients on ART at APC-supported clinics in 2014. Adherence was measured through a review of ARV dispensing records during similar time periods to determine if patients were picking up their refills of ARV drugs on time.

I was afraid of getting tested... I didn't even wait for the results. It was not until a health promoter went to my house to talk to me in private about the importance of knowing my status that I decided to face the outcome.

- Kissairys, a female sex worker who was recently diagnosed with HIV.

Increasing adherence to treatment (adherence equal or higher than 95%) 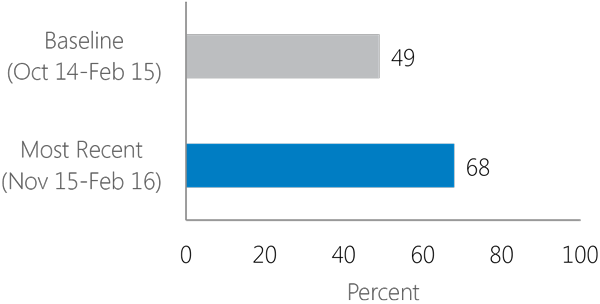 Viral load (VL) tests provide important information about the health status of HIV-positive patients. If a patient is on ART, viral load tests can also indicate the effectiveness of the treatment.

Although it is recommended that VL be monitored every 6-12 months, VL testing is very limited in low-resource settings. During the most recent measurements of ART adherence, APC reviewed the patients' VL test results. While obtaining VL results has long been problematic for many facilities, APC is proud to show that an average 85 percent of patients on ART at APC-funded clinics have received their viral load results.

Not all patients who adhere to ART as measured by ARV dispensation have a VL <1,000. Patients who have good adherence may have problems actually taking their ARVs as prescribed. In addition, some patients in this sample had a viral load test prior to initiation of ART. 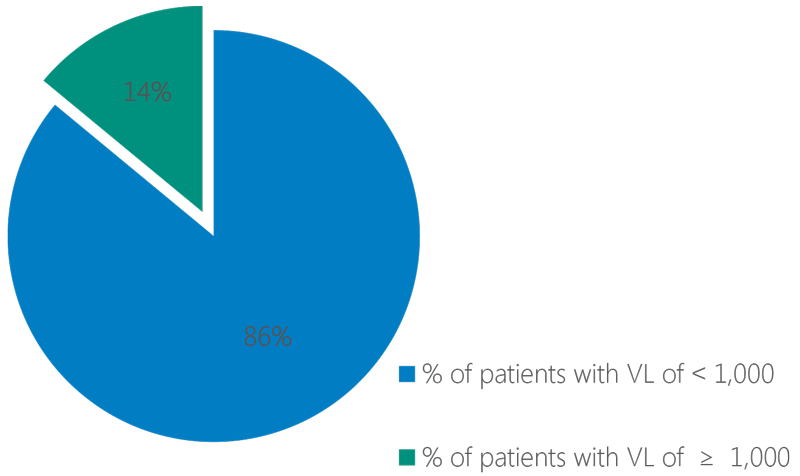 APC and its partners guide key and priority populations through the HIV treatment cascade while improving the quality of services.

During the first semester of FY16, APC continued advocating for human rights and the implementation of anti-discrimination policies in several NGO clinics and public hospitals.

As part of improving the quality of services, APC also surveyed transgender people to identify barriers that prevent this population's access to HIV services.

We developed a satisfaction survey to be filled out by patients who receive HIV services in all 14 hospitals throughout the region. We also implemented a tool developed by an APC international technical advisor to measure adherence to HIV treatment.

When APC assessed the quality of clinical services in 2015, it identified the need to strengthen storage and dispensing practices in the clinic pharmacies. APC asked MSH's USAID-funded Systems for Improved Access to Pharmaceuticals and Services (SIAPS) project for support to conduct a training workshop on pharmacy storage and dispensing practices.

Outcomes of the workshop:

Health Services for the Transgender Population

APC conducted an assessment of the health needs of transgender persons with the goal of using the results to improve the quality of services offered to this population in priority provinces of the DR. 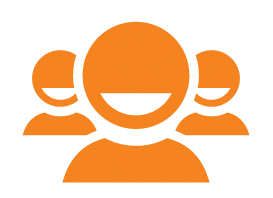 During the first semester of FY16, APC-