The Community-based Health System Model briefs identify and discuss critical health system inputs and processes that have contributed to the implementation and expansion of community-based service delivery in different countries. Countries were selected for their geographic diversity, type of service delivery model, and programmatic scale-up. This brief reviews Nepal's community health model to inform future policy, program design, and implementation in other countries. Read briefs on Malawi | Senegal 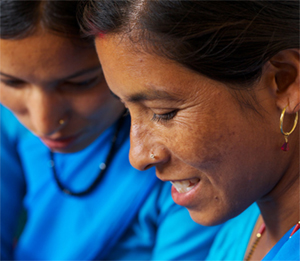 Nepal has made impressive progress in reducing infant, child, and maternal mortality since it began providing community-based service delivery 20 years ago.1 Since 1990, the maternal mortality ratio (MMR) has declined by more than two-thirds, from 850 deaths per 100,000 live births in 1990 to 190 in 2011.2 Nepal is one of a few countries in South Asia to achieve the Millennium Development Goal (MDG) 4 target to reduce child mortality by two-thirds and was close to achieving the MDG 5 target to reduce maternal mortality by 75 percent. These achievements can be at least partially attributed to the political will of the Government of Nepal (GON) and the continually evolving community-based health services provided by the three cadres of community-level service providers (CLSPs): female community health volunteers (FCHVs), auxiliary nurse midwives (ANWs) and auxiliary health workers (AHWs).2 Until recently, two other cadres—village health workers (VHWs) and maternal and child health workers (MCHWs)—operated in Nepal, but were upgraded to AHWs and ANMs. See Table 1 for Nepal's health statistics.

More than 90 percent of Nepalis receive their health services, including family planning, at the community level.

Despite this progress, neonatal and infant mortality continue to be high (33 and 46 deaths per 1,000 live births, respectively). Further, preventable infant- and child-specific diseases, such as diarrheal diseases and respiratory infections, are among the top 10 leading causes of death in Nepal, irrespective of age group.3 Overall, mortality rates are higher in rural areas compared with urban areas, particularly in the mountainous regions, due to limited health infrastructure and challenging terrain.4 Yet, over the course of 15 years, rural areas in Nepal have experienced more drastic reductions in under-5 mortality, with deaths dropping by more than 50 percent between 1996 and 2011,4,6,7,8 notably narrowing the urban/rural gap, as depicted in Figure 1. 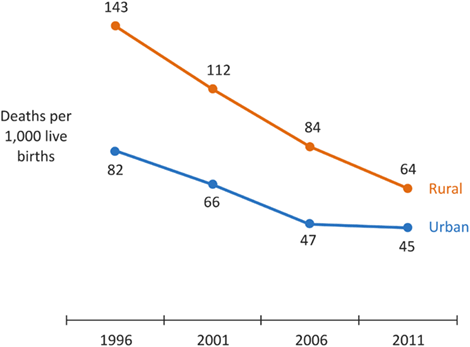 More than 90 percent of Nepalis receive health services, including family planning (FP), at the community level.5 Data show that from 1996 to 2011, the use of modern FP methods has greatly increased in rural areas, as shown in Figure 2. Further, contraceptive prevalence rate (CPR) has increased most among women in the poorest wealth quintile, from 30.3 percent in 2006i,6 to 35.6 percent in 2011.4 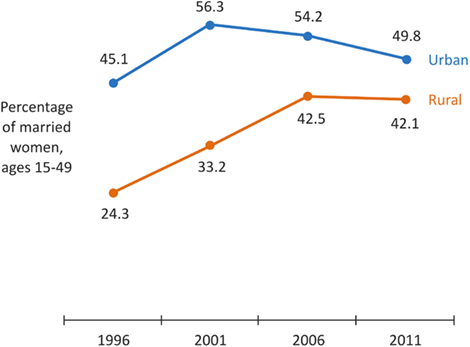 Nepal's public health system is decentralized and guided by policies on health service delivery, human resources, information systems, and the cost of services for patients.

Health policy is developed, standardized, and governed at the central level by the MOH. Services are delivered at the five lower levels, from the regional to the community (see Figure 3). The community level includes two political levels, the village development committee (VDC) and the ward. Services at the VDC are delivered through health posts (HPs), which are staffed by AHWs and ANMs, paid health workers who are employed by the MOH. At the ward level, services are provided in the community by FCHVs.ii This cadre of service providers delivers a basic package of essential maternal and child health (MCH) services including FP, antenatal care, immunization, and nutrition. Additionally, the three cadres of CLSPs (FCHVs, AHWs, and ANMs) deliver outreach services for immunization and primary health care (PHC) in the community to extend the full range of services available at the HPs. Each level of the public health system is linked by a formal, coordinated referral system.11 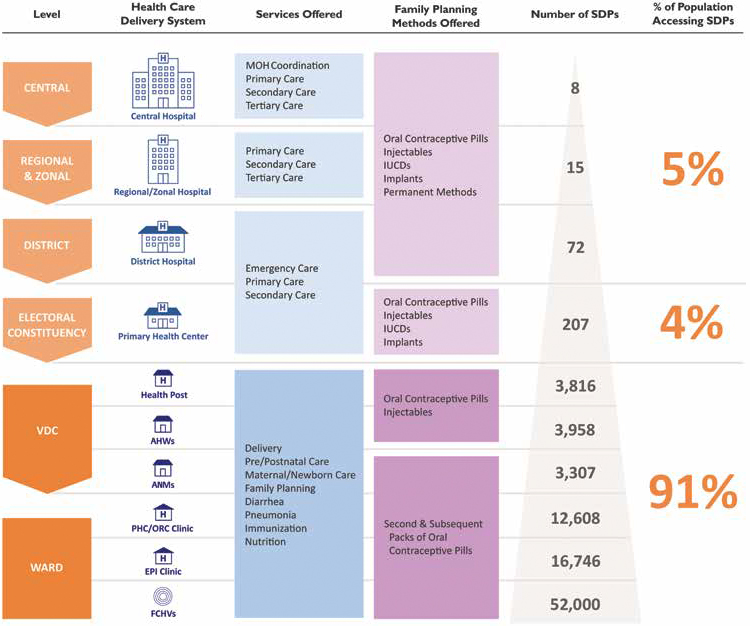 Nepal's health policy environment and health service delivery system have evolved over the past 25 years. The health system has moved from centralized to decentralized management, leading to more management structures at the district and VDC levels. This decentralized organization, as well as the gradual addition of health services starting with provision of basic FP services to delivery of child health medicines and life-saving maternal health services, has led to availability of a comprehensive package of MCH services at the community level.10

These changes have contributed to improvements in the uptake of health services and MCH outcomes. For instance, the CPR for modern methods rose from 26 percent in 19968 to 43.2 percent in 2011,4 with over 50 percent of all oral contraceptives being provided by FCHVs.5 Similarly, vitamin A supplementation for children 6-59 months, a commodity predominantly distributed by FCHVs and CLSPs, increased from 32.3 percent in 19968 to 90.4 percent in 2011.4

While these inputs are important to a well-functioning community service delivery system, some countries implement certain areas more effectively than others. Nepal's community health system delivers a comprehensive package of essential MCH services nationwide, which is probably possible because of several factors:

These strong community health service delivery inputs have led to a nationwide program with health outcomes that have improved over time and are described in further detail below.

In 1967, a national smallpox eradication program that had started as a pilot project in three districts was launched. One year later, the delivery of basic FP services was added to the scope of community health providers, who were largely supported by NGOs. By 1977, Nepal declared eradication of smallpox, and initiated a public sector Expanded Program on Immunization (EPI) using the same community platforms established through the smallpox program. The public sector community health system was formalized in 1988, starting with the selection and training of FCHVs. The initial scope of practice (SOP) included provision of oral contraceptive pills, male condoms, FP information, education, and communication; counseling on maternal health and antenatal care; and promotion of immunization services. FCHVs provided this basic package for four years while the program was scaled up from an initial 27 districts to all 75.12

Next, SOPs were expanded to include messaging about diarrhea prevention, provision of home treatment using oral rehydration salt (ORS) packets, and distribution of vitamin A. The MOH continued expanding the role of FCHVs in 1995 through a four-district pilot program that trained them to assess sick children for pneumonia, treat simple cases of pneumonia, refer more seriously ill children, and counsel mothers for all cases. Additional duties were added in 1999, 2003, 2006, 2008, 2010, and 2011 (see Figure 4).12 At present, the FCHV SOP includes delivery of comprehensive MCH services at the community level.11 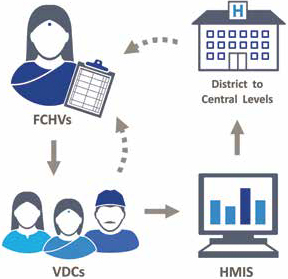 Each service added to the FCHV SOP was accompanied by distinct and service-specific training curricula, materials, and job aids. FCHVs receive training at various skill levels to offer each new service to their communities.12

A national survey of FCHVs conducted in 2006 highlighted that a vast majority of FCHVs reported delivering the full range of services listed in their SOPs. For example, 99 percent of FCHVs reported that they provided counseling to pregnant women, 91 percent referred women for injectable contraceptives, and 82 percent examined children with symptoms of acute respiratory infections in the past month.13 FCHVs explained that some services, such as oral contraceptives and ORS, had lower-than-reported provision rates because of higher demand for long-acting contraceptive methods and frequent ORS stockouts, in addition to other issues.

2. Ensuring commodity availability through a demand-driven ordering system from the district to the community

In 1994, the GON created a central Logistics Management Division (LMD) responsible for improving the supply of essential medicines in the country. Over time, the LMD expanded training, strengthened logistics information reporting, and transformed the system into a demand-driven pull system.

FCHVs order their stock based on the demand of their clients rather than waiting for the commodities to be "pushed" to them. Logistics system improvements, coupled with the increased availability of commodities nationwide, increase access to essential medicines at the community level.

These improvements to the logistics system increased access to health commodities at the community level. The GON developed a logistics campaign to train all health workers across the health system. In 2006, AHWs and ANMs—then known as MCHWs and VHWs—began ordering health commodities for themselves and the FCHVs. Commodities were "pushed" from the sub health post level to FCHVs.15 In 2011, the pull
system expanded to the FCHV level.15 Each FCHV is provided with 45 days of stock to ensure adequate monitoring and supervision of commodity distribution.

The results of the latest FCHV survey conducted in 2014 show that stockouts of ORS have decreased. In 2014, 75 percent of FCHVs were equipped with ORS, compared with only 49 percent in 2006.13,16 While the country has made great strides in improving its logistics system, when stockouts occur they are more likely to happen at the community level than any other level.5

Nepal utilizes a community health management information system (cHMIS) to assess the performance and effectiveness of community-level services. The cHMIS incorporates community-level data gathered by FCHVs through monthly delivery data collection forms that are then submitted to their AHW or ANM supervisors (see figure 4). While higher levels of the health system report a myriad of indicators through more than 40 registers, data collection forms at the community level are purposely integrated so less-skilled providers can complete them more easily. The supervisor then compiles the data into the HMIS, along with additional service delivery data from the HP, and then submits the information to the central level through standard reports that can be used in program monitoring.11

The implementation of an electronic cHMIS has improved community-level data reporting. Currently, around 97 percent of FCHVs17 and, as of 2012, 93 percent of VHWs and MCHWs18—now known as AHWs and ANMs—have recorded data into the cHMIS. These data are also used to inform the AHWs and ANMs supervision of FCHV performance in a relatively expedient fashion.

4. Provide a variety of incentives to keep volunteer CLSPs motivated

FCHV attrition is impressively low in Nepal, especially for a volunteer program. Annually, 4 percent of FCHVs leave their posts; in 2014, FCHVs had an average of 13.9 years of experience, with 46 percent of FCHVs having served for 16 years or more.16 The MOH uses an array of incentives to motivate FCHVs.13 These incentives provide direct and indirect benefits that contribute to a supportive environment and recognize the importance of FCHV's work.

According to the 2014 FCHV National Survey, FCHVs identified community appreciation as a factor that affected their motivation to help others.16 While many other countries have volunteers with similar direct incentives, Nepal's program stands out through the large-scale enabling environment created for FCHVs through motivators aimed at promoting and building FCHV recognition in the country. While there is community recognition in other countries, Nepal's approach is promulgated through mass media that reaches a larger population.13

Lessons for Other Countries

Nepal's community health system continues to evolve to meet the growing health demands of its people. It has slowly expanded to include a comprehensive package of MCH services delivered by CLSPs. It is likely that key community health system inputs highlighted in this brief played a critical role in improving health outcomes, including MDGs 4 and 5, for underserved and vulnerable populations in the country. Lessons from Nepal's experience may be helpful for other countries that want to expand and/or implement their own community-based program. These include: 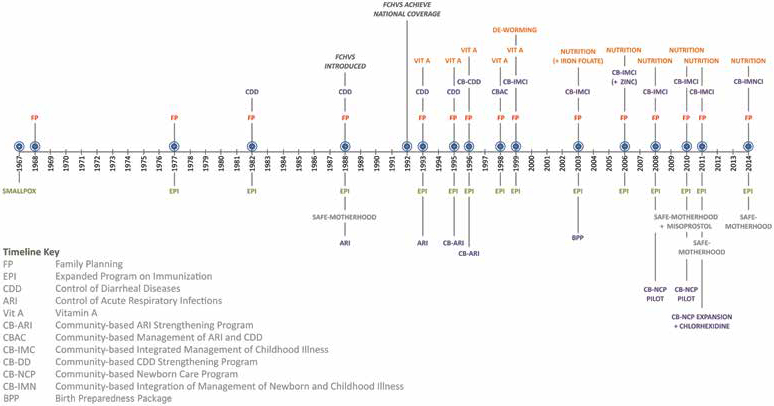 i 2006 was the first year that the Demographic and Health Survey (DHS) provided data by wealth quintile.

ii A full list of the CLSP roles and responsibilities can be found in the Nepal Country Profile in the APC Community Health Systems Catalog.

3 Institute for Health Metrics and Evaluation. 2010.