Watch the Advancing Partners & Communities (APC's) compilation video on our work over the past seven years (2012-2019) in community health.

From 2014 through 2019, APC worked in the Dominican Republic to improve access, delivery, and quality of HIV prevention, care, and treatment services for key populations and priority populations.

From October 2015 to April 2019, the USAID mission in Botswana funded the APC project. The aim of the project was to ensure that communities measurably contribute to achieving the UNAIDS 90-90-90 targets. Read more about what the project accomplished over the last four years.

Watch the recording from APCs farewell webinar highlighting the project's critical work and legacy in community health in more than 40 countries over the past seven years (2012–2019).

Learn more about the PHE work done by APC grantee, Hen Mpoano, in the Western region of Ghana. The project aimed to create awareness in PHE approaches to show the benefits of improved health and environment outcomes as well as strengthening community-based distribution systems for contraceptives and much more.

The goal of APC in Uganda over the past five years was to reduce mistimed and unwanted pregnancies among teenagers and women of low parity and contribute to a reduction in total fertility rate. Learn more about the work and the results accomplished over this time period.

Community Health Matters on the Journey to Self-Reliance
September 30, 2019
Event

From September 2013 to September 2019, JSI Research & Training Institute, Inc. implemented the USAID-funded APC Guyana HIV/AIDS Reduction and Prevention Project. The project design included innovative, evidence-based, and cost-effective solutions, tailored to meet the needs of populations at risk of HIV in Guyana, in the contexts where programs are implemented, and where individuals reside.

Health Facilities In Ethiopia Connect To A World Of Resources

Hawas Health Center in Adama Town, Ethiopia, is bustling with activity as health workers prepare for the morning staff meeting. Negash Ali, head of the health center, meets with all case team members to discuss their daily plans before the center opens. With approximately 200 patients attending the clinic each day, Hawas is one of the area’s busiest facilities.

As APC comes to a close after seven years, we look back on how the project has improved the health and lives of countless people in thousands of communities in more than 40 countries.

More women and couples, especially those living in more conservative and hard-to-reach places, can now access a wide range of voluntary family planning methods. More patients know their HIV status and are getting the treatment they need. More survivors of Ebola virus disease are leading healthier lives with less stigma. More people who are vulnerable due to disability or live in challenging places now have access to rehabilitation, counseling, and health care.

Advancing Partners & Communities (APC) advances and supports community programs that seek to improve the overall health of communities and achieve other health-related impacts, especially in relationship to family planning.

Interactive data dashboard on youth sexual and reproductive health in Asia and the Middle East.

A snapshot of community health systems in different countries.

APC works to advance and support community programs that seek to improve the overall health of communities, especially in relationship to family planning (FP). Through global technical leadership and collaboration, APC’s goal is to increase support for and commitment to community-based family planning in USAID priority countries. APC aims to increase access to quality FP services, expand the contraceptive method mix, and improve upon organizations’ capability to manage USAID funds and implement high quality and innovative community-based health programs. 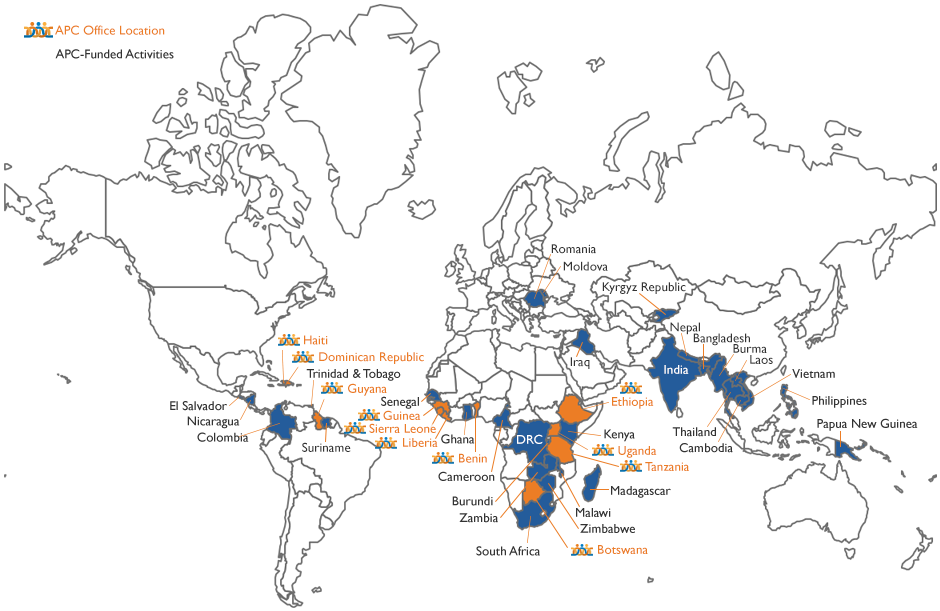 END_OF_DOCUMENT_TOKEN_TO_BE_REPLACED

December 19, 2019
Webinar - Putting Communities First: The Legacy of USAID's APC Project
Watch the recording from APCs farewell webinar highlighting the project's critical work and legacy in community health in more than 40 countries over the past seven years (2012–2019).
September 30, 2019
Healthy Families Thrive
Since 2012, the USAID-funded Advancing Partners & Communities (APC) project has worked in over 40 countries to improve community health systems and build the capacity of local nongovernmental organizations (NGOs) to provide basic health services, expand access to voluntary family planning, and connect people to health facilities.
July 24, 2019
Webinar: Practical Tools to Help You Bring Family Planning to Communities
View the recording of the webinar put on by APC grantee Christian Connections for International Health (CCIH) that talks about practical tools to inform communities in language they can understand of the variety of choices they have to time and space pregnancies. The webinar explored how you can use these tools in your community-based programs or develop your own for the areas where you work. They also looked at how to develop, test, and translate tools that work for communities, and explored an example of a training curriculum developed for Islamic leaders. These lessons are applicable not just for family planning, but for all community-based programs.

Health Facilities In Ethiopia Connect To A World Of Resources 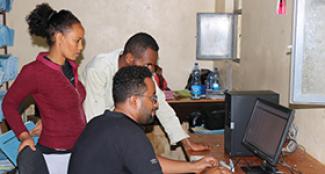