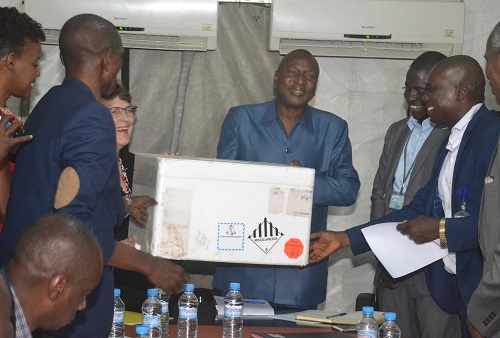 During an official ceremony on October 25, 2017, the Guinean Ministry of Health (MOH) received the first of several shipments of laboratory supplies and medical equipment, donated by USAID through the Advancing Partnerships & Communities project (APC). The supplies and equipment will help prevent further Ebola virus disease (EVD) transmission and improve healthcare for EVD survivors.

The donation included hospital beds and other medical equipment, as well as laboratory supplies such as reagents. It was handed over to Dr. Sakoba Keita, Director General of the MOH’s National Agency for Health Security (NAHS). The U.S. and Guinean Governments collaborated through the NAHS and APC’s Ebola Transmission Prevention and Survivor Services (ETP&SS) program to make the donation possible. Dr. Keita praised the achievements of the collaboration in support of the health sector and thanked all of the partners for their support.

Barbara Dickerson, Director for USAID’s Mission to Guinea and Sierra Leone, underscored the importance of the donation in supporting the country’s response to the risks of a resurgence of Ebola: “The laboratory supplies are destined for the use of the Hemorrhagic Fever Laboratory to conduct necessary tests in the context of preventing the transmission of Ebola Virus Disease (EVD). The medical equipment provided today will be used to improve the quality of care for EVD survivors in selected health facilities, and more generally to improve the quality of care for the people of the surrounding community which these facilities serve, including survivors of EVD.”

In Guinea, APC is supporting the NAHS in implementing a national strategy to prevent the resurgence of Ebola. The MOH strategy is built on a focus on survivors, community-based surveillance, case management, biological monitoring, and socio-economic support for survivors. APC’s ETP&SS program focuses core activities on three priority regions—Conakry, Kindia, and Nzérékoré—with national coverage for selected activities. These three regions account for more than 80 percent of registered Ebola survivors. The donated medical equipment will help improve the quality of care in APC-supported service delivery sites that serve a high volume of EVD survivors.

The event was organized by APC and NAHS staff and hosted by the Pharmacie centrale de Guinée (PCG). Guests included representatives of USAID, the MOH, the PCG, APC, NAHS, and other technical partners and donors, as well as the media.