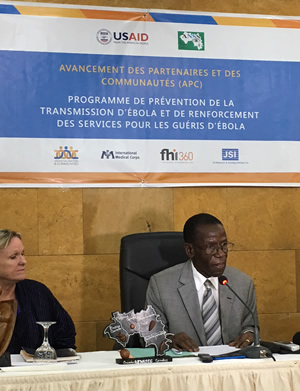 Minster of Health Édouard Niankoye Lamah describes the successful partnership between the Ministry of Health and the APC project in Guinea during the closing remarks. The USAID-funded Advancing Partners & Communities (APC) project held a high-profile closing ceremony for the Guinea-based Ebola Transmission Prevention & Survivor Services (ETP&SS) program on July 26, 2018 at the Hotel Riviera in Conakry.

During the half-day event, Minster of Health Édouard Niankoye Lamah thanked the APC project for its efforts aiding Ebola survivors in Guinea and recommended continued follow-up to prevent a future outbreak. One day before the closing ceremony, there was an official handover of the eight health facilities renovated by APC to the Minister of Health, hosted at Conakry’s Ignace Deen National Hospital.

The acting director of the USAID Mission, the Director General of the National Agency for Health Security (NAHS), and representatives from the World Health Organization and the U.S. Centers for Disease Control and Prevention participated in the event, as well as the director of the APC project. Around 50 attendees and 10 representatives from local press learned about the project’s achievements and heard from discussion panels featuring the project’s stakeholders and beneficiaries. Participants included Ebola survivors, health services staff and leaders, and representatives from non-governmental organizations working in health.

The director of the APC Guinea office, Dr. Meba Kagone, presented on the project’s activities over the past two years, which have aimed to reduce the risk of resurgence of Ebola and to increase Ebola survivors’ access to appropriate health services. The project’s achievements were also highlighted in success stories, short videos, a photo journal, and posters presented at the event. Since the project was established in June 2016, the ETP&SS program in Guinea worked with the Ministry of Health to achieve the following: 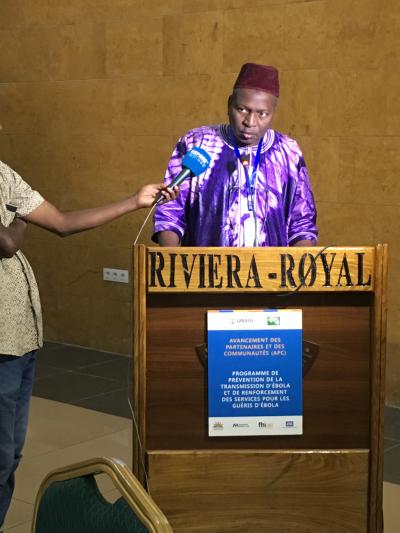 Dr. Sakoba Keïta, Director General of the NAHS, highlights during his speech that the ETP&SS program supported his agency with two of their priorities: prevention of a resurgence of Ebola and support for survivors.

Ms. Brioni James, Acting Director of USAID in Guinea, opened the ceremony reminding the audience of the scope of the Ebola epidemic in Guinea. “USAID through its Ebola Transmission Prevention & Survivor Services program has supported the Guinean government to address these concerns by strengthening surveillance to prevent the resurgence of Ebola and ensure health support for survivors of the disease,” Ms. James said at the event. “I encourage NAHS to continue its efforts to sustain the achievements of the program to prevent the resurgence of Ebola.”

The event included two panels, one on the project’s surveillance activities and one on the project’s results. Dr. Sakoba Keïta, Director General of the NAHS, participated in both panels. Dr. Sakoba also noted that the Democratic Republic of Congo has just declared an end to their ninth Ebola outbreak, whereas Guinea has had only one tragic and widespread outbreak. Therefore, continuing close surveillance is critical to prevent another outbreak in Guinea. He stated his agency is committed to continuing the sentinel site surveillance program until 2020 or until the scientific research can prove definitively that the survivors no longer carry the virus in their system. "We must stay vigilant in the face of this terrible threat to our population," Dr. Sakoba said.

During the panel on surveillance, Dr. N’Faly Magassouba, Director of Guinea's National Laboratory for Hemorrhagic Fevers, discussed the three regional laboratories' capacity to conduct testing of semen from eligible male survivors. 89.5% of eligible male survivors aged 15 years and older participated in the last round of quarterly testing supported by APC's ETP&SS Program, in close coordination with the US National Institutes of Health (NIH). The testing results will contribute to NIH's research in the sub-region on viral persistence in certain bodily fluids, such as semen. Dr. Tolno, local representative of NIH in Guinea, also participated in this panel, moderated by Dr. Moussa Koné, Director of the Surveillance Department at the NAHS.

During the discussion, a participant from the audience highlighted the importance of providing better mental health care for survivors in Guinea, a health specialty which is critically neglected and deficient in Guinea and across West Africa. The ETP&SS Program, through its grantee, International Medical Corps, deployed regional medical doctors in the program's priority intervention regions who provide supportive supervision and mentoring to local health workers to improve the quality of care for survivors and to support referrals for specialty care, such as psychiatry, when needed but not available in the remote regions of Guinea. The program has also trained over 200 community and religious leaders in stigma reduction and, with social support through the national network of Ebola survivors (RENASEG) and the local survivor associations, has promoted the reintegration of survivors fully into their communities. Through key program interventions such as these, ETP&SS is helping to address the mental health needs of survivors and to increase survivors’ access to health services.