Gaining Trust to Save Lives

A Survivor Advocate Connects an Ebola Survivor with Life-Saving Services 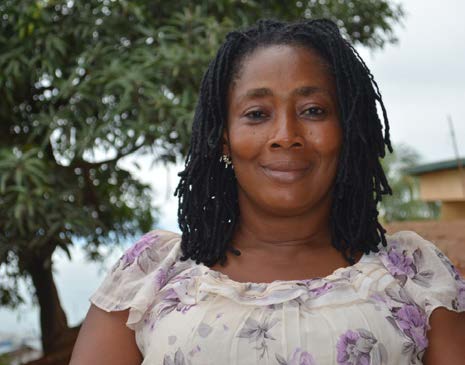 The Ebola virus disease (EVD) outbreak that hit Sierra Leone between 2014 and 2016 had far reaching consequences, including fear of getting in contact with the health workforce and a legacy of serious difficulties in accessing health services. Rebuilding trust in the health system was critical to improving the health of the population.

Dora Dumbuya is an Ebola survivor who was afraid of going to her local health facility. She survived Ebola after contracting the virus from her younger sister. “My sister died in December 2014. My four sisters and I visited her home and she was lying dead in the parlour; we wrapped her body and alerted the then Ebola hotline. Two days later, all of us who entered our sister’s home became infected—but we survived,” recounts Dora.

Sierra Leone has over 3,000 Ebola survivors like Dora, many of whom face a range of ongoing medical complications including joint pains, eye problems, mental health and fertility issues, among other concerns. Many Ebola survivors are also shunned by their communities and face livelihood and other economic issues.

Soon after Dora returned home from the Ebola treatment center, she started having health issues. “My joints were very weak; I was frequently tired and started feeling serious pain in my lower abdomen, something I had never experienced before.”

Dora had been reluctant to seek treatment at the government hospital even though she knew that survivors had been included in the Free Health Care Initiative, a government-sponsored program that provides free services to certain vulnerable popualtions, including pregnant women, breastfeeding mothers, children under five, and EVD survivors. “I was reluctant to get care at the health facility, despite the pronouncement by government, because I was afraid I would not be properly looked after…” Many who did access care would always return home complaining of drug shortages and other challenges.

My husband and other family members took me to some traditional healers, but my situation was not improving. We resorted to home treatment for a while, but it only made matters worse,” she pointed out.

Since the Comprehensive Program for Ebola Survivors (CPES) began, Dora has received regular home visits from a Survivor Advocate (SA). SAs provide peer-to-peer support at the community level and strengthen access to health services by EVD Survivors. “With my health deteriorating, Memuna Kamara, my Survivor Advocate tried to convince me to visit the hospital,” Dora explained. “She persuaded me that the services for EVD survivors are free at government hospitals, including surgery. My family and I were reluctant, but Memuna did not give up on me. She kept coming and talking to me.”

Memuna took Dora to the Princess Christian Maternity Hospital (PCMH), where she was referred to Sierra Leone’s main government hospital, Connaught, in Freetown. “I thank God because at Connaught the doctors and nurses treated me well. They conducted a series of tests and found out that I had a severe hernia and needed urgent surgery. I did not want to go for the surgery, but Memuna encouraged me; she convinced me that it was my only hope of staying alive. She convinced my husband too, and my family agreed.” After finally going through the operation, Dora is now healthy and happy that there are no complications from the surgery.

“I thank God for Memuna, who stood by me to make sure I got my health back. If I had not gone for the surgery, I was surely going to die because my husband and I did not have the money for the operation.” Dora now advocates to other survivors in her community to access services at the health facility when they’re not well. “I have made it my duty to help convince other survivors to seek treatment for their conditions in government health facilities. I tell them my story and make them understand that treatment is free for EVD survivors.”

From May to August 2017, 17 SAs and four SA Supervisors, who were trained in Western Area Urban district, completed more than 6,000 home visits to survivors. These home visits have helped many survivors like Dora gain access to medical treatment they desperately need.

When Sierra Leone was first declared Ebola free in November 2015, President Ernest Bai Koroma committed to ongoing support for Ebola survivors, including free healthcare and psychosocial support. The USAID-funded Advancing Partners & Communities project is helping this effort by supporting the Sierra Leone Government’s CPES, jointly led by the Ministry of Health and Sanitation and the Ministry of Social Welfare, Gender and Children’s Affairs.

The JSI-managed Advancing Partners & Communities project improves access to quality health services for EVD survivors by strengthening the health system’s ability to provide specialized services and defining clear referral pathways to higher levels of care. By supporting the training of SAs, as well as SA Supervisors and Referral Coordinators, the project helps to ensure that people access appropriate care. The SA training was carried out by GOAL, one of JSI’s implementing partner. The project also reduces stigma and other barriers that keep survivors from accessing health care and social services.