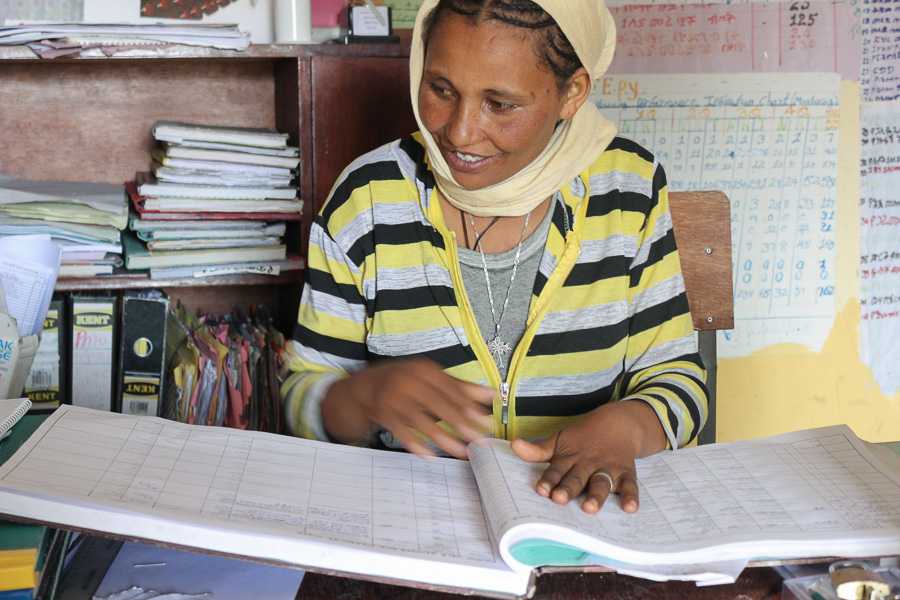 Alemnesh Assefa is a 27-year-old Health Extension Worker (HEW). She is a government employee health worker who serves in a village. In the village, the lowest health structure is called a health post where two HEWs serve a population of 5000. Each health post is supervised by a health center which supports 5 health posts, i.e. a population of 25,000.

Assefa has four sisters and one brother and is married but has no child of her own yet. She works in a village, or a kebele, called Aba Mote where she has served for the last five years. Aba Mote is a rural village found in Debre Birhan Zone, Amhara region of Ethiopia. For three years before that she served in another village. Her good work was the reason why she was transferred to this once poorly performing kebele. Five years later, the kebele reported significant positive changes.

Assefa provides mainly preventive, and to some degree curative, health services, which is a job that keeps her busy most hours in the day. On her typical work day, Assefa wakes up at 6:00 in the morning and before she goes to the heath post, a community member may come over to her home in search of family planning service or advice on any health matter. After she sees them off, she goes about cleaning her home and having her breakfast before she heads out to the health post. Some days she stays at the health post providing services and other days she makes home visits and follows up with different families. This she does alternatively with the other HEW who works with her. There are also days when she has to help out in other sectors. For instance, she may help out on environmental projects in the agricultural sector.

Assefa’s official day ends at 5:00 in the evening when she leaves the health post, but her work does not end there. On her way home, she could meet with community members who need assistance. She also drops into certain households to look after a sick member of the family or to follow up on health practices. When she finally gets home, she prepares and has her dinner. Then she takes some time to fill out her register, since updating her information daily is an imperative part of her job. She finally calls it a day by 11:00 in the evening.

“I’ve always been proud to work with mothers, especially helping them during their delivery. I share in their pain and anxiety during their labor when I accompany the mothers to the health center. I remember a time when the women in the community doubted my skills as a health worker. At one time a husband, whose wife has been in labor the whole night came to fetch me in the early hours of the morning. I quickly packed the things I would need to help her and left for their home. This was about four years back when women still delivered in their homes and ambulance service was unavailable to take them to health facilities. I greeted her in the customary way one greets a laboring mother, ‘May the Mother Mary be near you.’ I told neighbors who had started arriving to allow the woman to be in any position she wished including letting her pace the small room which is what she wanted to do for a while. Finally when she was ready she told me so, and I let her lie on the bed. The delivery went smoothly and without complication. The women who had gathered were thankful that it all went well and later on went about telling all the other women what a good job I had done.”

Some of the most challenging times in Assefa’s work are when she has to deal with households who deliberately default on accomplishing a health package. This is a list of preventive actions that each household has to achieve, for instance, building latrines to stop open defecation. Especially in the early years, certain community members would resist accepting the health lessons Assefa taught. They would refuse to let her into their homes by putting fierce dogs by their gates. However, today things have changed for the better. Access roads have now even been built for ambulances to pick up a laboring mother from her home and take her to a health facility.

Reminiscing about her childhood Assefa says, “I remember when we were very little and I played with my friends, we’d pretend to be doctors and at school we’d look up to our teachers and believe that one day we’d become teacher like them. But my parents were not eager for me to continue my education. I had to run away to live with my aunt who allowed me to go to school. When I got to grade ten, I took the national examination but my grade was too low to allow me to join higher education. My aunt was no longer willing to support me. So during that summer I left to Addis Ababa where my elder sister lives with her family. My brother-in-law proposed that I get hired as a house maid which I refused. I had no better plan and I did not want to go back to my parents’ home. A few weeks later we heard that a government health extension program was being launched and a training opportunity for girls who completed grade ten was open. So my sister told me to register which I did on the very last day at the last hour 5:30 which was the closing hour. But the man who was closing the office was kind enough to accept my documents and to allow me to register. Henceforth, I became a health extension worker serving rural communities to this day.”

With a smile Assefa says that none of her family members would have expected her to turn out the way she did: an influential health worker who speaks out in public. She’s always been the shy girl who hides in the back of the house when guests come to their home and none of her family members thought that she could get a job and earn a living, let alone help them out.

Asnakech Hailu is a former colleague and a good friend whom Assefa says helped her get over her bashfulness and who played a very important role in her life. Hailu helped Alemensh learn how to mingle with different people in their community and participate in discussion with government administrators and people of importance in their community.

There have also been other people who have influenced her. Assefa’s Kebele Administrator is one such person who taught her the importance of being patient and respectful of people’s privacy. “I once made the mistake of openly accusing a woman of getting pregnant every year when her husband informed me that she was not taking her family planning pills properly. This reached the ears of the Kebele Administrator who instead of reproving advised me that, as a HEW I had to maintain the dignity of every person. It was the biggest lesson in my life.”

When Assefa tells of her personal life, she says there’s a very thin line between her work and her personal life because her work does not end when she walks out from the health post. She visits households at odd hours if she was not able to do so during office hours. A laboring mother could call her on her mobile phone in the middle of the night and she’d have to go over to the mother’s home as late as 2:00 in the morning. To be walking in the dark on her own is a risk, but she does it anyway. Her colleagues admonish her saying that she makes no time for herself and takes too many risks.

“I’ve gained so much in my 8 years as a HEW and I feel so rewarded by the changes that have happened. So if I could have any job now, I would choose nothing more than to be a midwife. Nothing would please me more than to help a woman deliver and share in her joy.”

The Last Ten Kilometers (L10K) works to strengthen the bridge between households and the primary health care unit (PHCU), Ethiopia’s basic health service delivery structure. The aim is to improve high impact maternal, neonatal and child health (MNCH) care practices among the rural households. L10K is a project implemented by JSI Research & Training Institute, Inc., with grants primarily from the Bill & Melinda Gates Foundation and with additional funding from UNICEF and USAID, through the Advancing Partners & Communities Project.