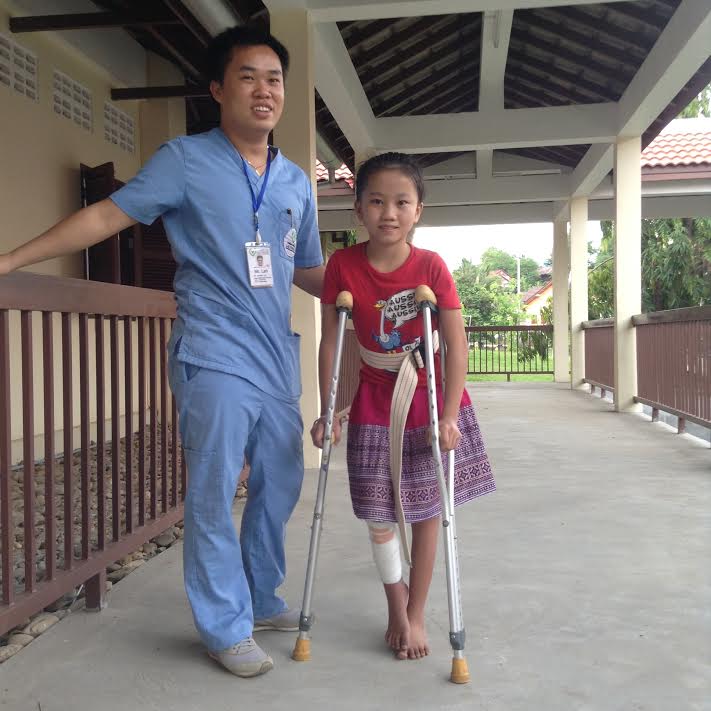 Sengdueane Phommy, or Lah as he is more commonly known, is a physical therapist at the Lao Friends Hospital for Children (LFHC) in Luang Prabang, Laos. As part of the hospital’s USAID-funded World Education Laos TEAM project sub-grant, Lah worked closely for the last 18 months with a Canadian physical therapist volunteer, Janice Lo, as part of a physical therapy mentorship program that involves transferring knowledge, skills, and attitudes. In addition, Lah developed his skills further by joining a two-month occupational therapy training in Thailand with other therapists from central hospitals in Vientiane as part of a training agreement between Khon Khaen University and the Center for Medical Rehabilitation (a project also funded with a World Education TEAM project sub-grant).

During the eighteen months of his mentorship, Lah has been involved in the care and rehabilitation of many inspiring cases at the hospital. He gradually took on more responsibility and developed his skills while working side by side with Janice. Recently, a twelve-year-old girl was admitted to the hospital for chronic burns sustained five months earlier from a gas explosion. Over several months she received intensive medical and wound care at LFHC and underwent a skin graft operation, which was performed at the Luang Prabang Provincial Hospital.

During this time, she received intensive physical therapy led by Lah and Janice, which included: gradual strengthening; range of motion exercise; mobilization; conditioning; and gait training, first with parallel bars, and finally with crutches. Her range of motion dramatically improved to full functional ranges. Her family was an incredible asset and inspiration for her success, staying involved in all of her care and rehabilitation.

In the future, Lah hopes to further develop his skills and gain experience from more trainings in physiotherapy and he will continue doing what he loves: working as a physiotherapist. “I want to help Lao people, especially people in Luang Prabang, who are in need and suffer from their health issues, to have a better quality of life,” said Lah.