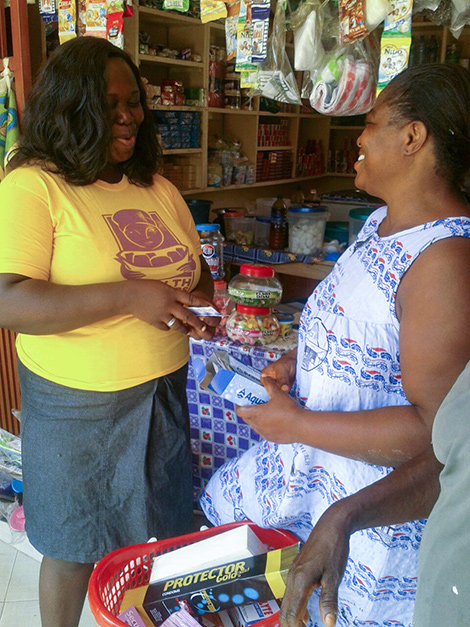 HealthKeeper Getrude Kofie explains to this shop keeper how to make her water safe for drinking and cooking.

Mrs Gertrude Emelyne Kofie, a Health Keeper based in Ashiyie, a suburb of Adenta in the Greater Accra Region has said that, despite the several challenges confronting her profession as a health worker, she is still determined to continue impacting positively people’s lives. According to her, she has always wanted to work to improve people’s lives. She started off as a caterer and then enrolled in the Health Keeper program nine months ago.

Explaining how she developed her zeal of becoming a health worker, Kofie said she is a member of a women’s group in her community under ADMA (the Adenta Municipal Authority). “One day, HealthKeepers Network came to talk to us about the community-based family planning (CBFP) program.” Mrs Kofie said. “I developed interest and enrolled in the program. A few weeks later they organized training for us.”

Although there were challenges, Mrs Kofie was still not deterred in accomplishing her duties as a health worker. “As a community-based volunteer, I have to go from house to house in various communities to educate people on family planning, HIV prevention, diarrhea management and to sell my products. Going into homes and meeting people you don’t know--sometimes their actions alone could discourage you. It has not been easy. Some will receive you in a manner that shows you are not wanted, so you will quickly leave, but others are very receptive and what comes out of it is another story altogether.”

“I love what I do. When I succeed in impacting people’s lives positively after the one-on-one interaction, it gives me satisfaction. If I go to three, four, or five people, and let’s say I’m able to impact one person’s life and see a transformation, I have that satisfaction that at least my work is not in vain.”

"I have learned not to take anybody for granted, not to judge anybody by looks alone, and to treat everybody with dignity and respect."

According to the mother of three, her job as a health worker has made her respected, recognized, and valued in her area. People come to her with so many different stories and if she can’t help, she refers them to the health facility.

Mrs Kofie noted further that the application of the lessons she had learnt in her work were very important in establishing a good relationship with her clients. “I have learned not to take anybody for granted, not to judge anybody by looks alone, and to treat everybody with dignity and respect.”

Sharing some of her secrets with the HealthKeepers Network, she maintained it is ethical and prudent that as a Health Keeper, clients information should be kept confidential, especially after providing healthcare to them. “By keeping information confidential it will be easier for the person to give you more information. It’s all about the respect and how you handle the client.” Mrs. Kofie emphasized.

Sharing some of her childhood aspirations, she further explained that she wanted to be a caterer but when she told her dad he suggested that her interest in catering was related to her love of food, so she became a travel agent for several years.” When I got married and had kids, I realized I needed time for the kids so I gave up. After my last child, I decided to go back to the university where I graduated as a social worker.”