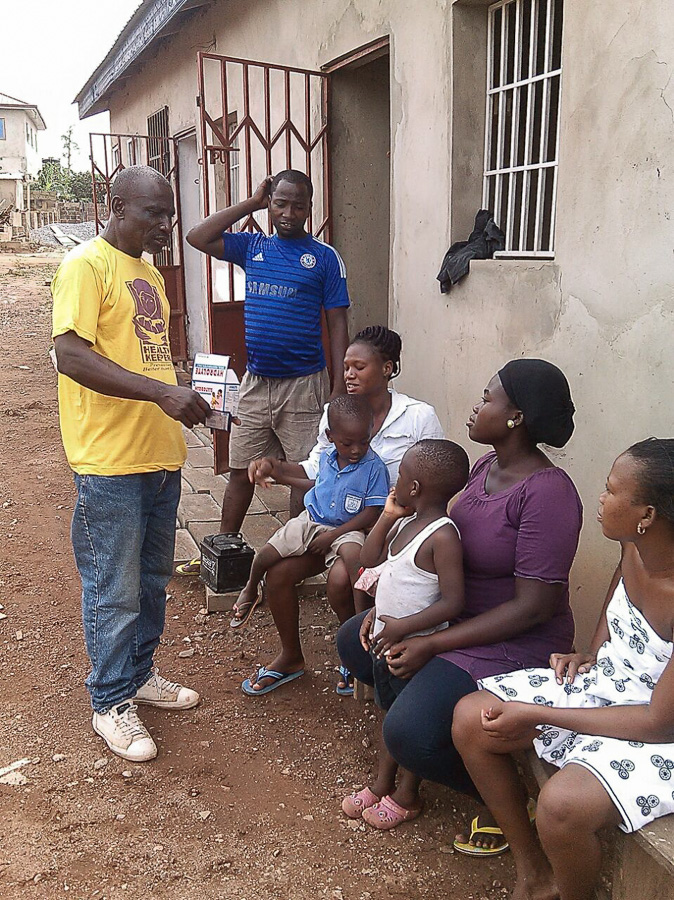 Nana Ohene Kwatia providing members of this household with information on how to use oral rehydration salts (ORS) to manage diarrhea. Photo credit: HKN

Nana Ohene Kwatia, a HealthKeeper who lives at Frafraha-Old Town, a Suburb of the Adentan Community in Accra is also the paramount chief of the Obom traditional area, a suburb of Adawso in the Eastern region.

Kwatia said his passion to become a health champion compelled him to join HealthKeepers Network (HKN). He enrolled in the HKN program about a year ago and has worked actively since. “I have always been championing health issues in my area. Just last year, I volunteered for a UK Aid program on Ebola, Cholera and Malaria. I have been campaigning about the need to maintain a healthy environment, even before I joined HKN." According to Kwatia, family planning (FP) and reproductive health issues are very paramount and need to be prioritized as key interventions. Kwatia believes that through his work he is also raising awareness on the importance of reproductive health and FP.

Despite the progress he is making and the many financial benefits, Kwatia realizes from the sale of Aqua Tabs, male and female condoms, and others products, there are still challenges confronting him as a health worker. Stressing on some of the challenges, Kwatia hinted that most of the people in his community feel reluctant and shy to buy products like the male and the female condoms. “Sometimes people think it’s a shame and feel shy to buy the condoms. As for the women, they do not even want to hear about the female condoms.”

Kwatia said the certificate awarded to him as a health keeper has made it easy for him to move from house to house to do his work. He is accepted and recognized anytime he visits new homes. “Those days we had no ID cards and no certificate, and it was difficult for me, but now that I have my certificate, I just use it to officially introduce myself.”

"Sometimes people think it’s a shame and feel shy to buy the condoms. As for the women, they do not even want to hear about the female condoms."

Kwatia believes his work as a health representative in his community has earned him much respect, and as a result he has been nick-named by most of his clients as “Dr. Aqua Tab.”

Explaining how he had been able to maintain good relationship with his clients, “Dr. Aqua Tab” said, “There are times I explain the kind of products I have to people, and they come to see me later in private. For instance, there is this contractor in my area and I went to sell to him some products and he came to thank me the following day. Most people prefer coming to buy the family planning products secretly, and this should tell you they want to keep it secret. “As a health worker, you should always keep your clients information confidential in order not to jeopardize the respect and relationship between the two of you.”

Throwing light on his childhood aspirations, Kwatia said he had always wanted to become an Agricultural officer, and as a result studied Agriculture during his days in College. “And even now if you go to my village, I have lots of goats, sheep, and fowls that I raise.”