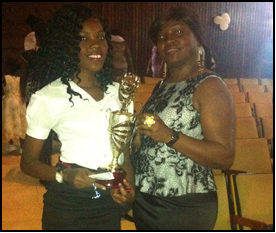 Tashana Legall was born to a low income family in Guyana. Both her parents worked in order to support Tashana and her three siblings, but it was challenging to make ends meet.

When Tashana was 6 years old, her father contracted HIV and died, leaving her mother to support the family on her own. Two years later, her mother also died of AIDS-related causes, leaving the children orphaned. Tashana was separated from her siblings and placed in the custody of her aunt, Carolyn Leitch, a social worker at Comforting Hearts (CH). Despite living in a loving home with her aunt, Tashana was traumatized by the loss of both parents. “Tashana has withdrawn. No matter how hard I try, I cannot replace her mother,” her Aunt reported.

In 2007, Tashana enrolled in a program for children orphaned or made vulnerable by HIV (HKID) at Comforting Hearts. The organization was a source of psychological, nutritional, spiritual and academic support to Tashana for several years. The continued nurturance and support from the staff at CH enabled Tashana to progress at school. Upon completion of her secondary education, she enrolled in the job readiness training program and began training in cosmetology at the Vryman’s Erven Training Centre.

Soon after Tashana’s enrollment in HKID, friends and family started to notice a positive change in her personality. The staff at CH described her as open and aspiring. “Tashana is more audacious and ambitious. Her interaction at CH with other children who identify with her emotional struggle gave her an understanding of her situation,” said her aunt.

“Comforting Hearts has been there for me. I give back to the organization by being a product of their hard work. I am an example for youths who are facing emotional and psychological hardship to follow.”

In April 2015, Tashana led the Vryman’s Erven Training Centre’s debate team in a competition held by the Ministry of Culture, Youth, and Sports. Her team argued that young people with excessive tattoos should be allowed to work in the public sectors. This experience helped Tashana hone skills in critical thinking, assertiveness and public speaking. She was also given the opportunity to travel to new places like the Kuru Kuru Training Centre in Linden, the New Opportunity Corp at Onderneeming on the Essequibo Coast and the Sophia Training Centre in Georgetown.

Tashana graduated from the Centre in July at 17 years old. She was awarded best student due to her outstanding performance.

Tashana is now a telemarketer with Nand Persaud International Communication and hopes to own her own business one day.

“Comforting Hearts has been there for me. I give back to the organization by being a product of their hard work. I am an example for youths who are facing emotional and psychological hardship to follow.”

A supportive and nurturing environment for children can help them overcome the loss of parents.

Guided development can empower children to make healthy decisions and achieve their full potential. Not only does this help elevate their socio-economic status, but it also enhances their prospect of a successful life.