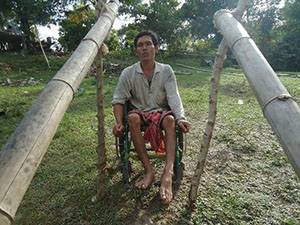 In October 2010, Ne had severe low back pain for unknown reasons. It kept getting worse and worse so, after several days, his wife took him to a traditional Khmer healer for treatment. Unfortunately, his condition did not improve and he then became paralyzed from the waist down.

In January 2011, his wife took him to the Kratie Referral Hospital for treatment. The doctor conducted an assessment and took x-rays of his spine where it was found that Ne had tuberculosis (TB) on a spinal bone that had caused a degenerative vertebral disorder and significant spinal deformity. The doctor in the hospital treated him through the Direct Observer Service Program by providing anti-tuberculosis drugs every day for a month while Ne stayed in the hospital. Then after his discharge he continued to take the TB medicine for another two months at home.

Nam Ne was also prescribed a wheelchair and a pair of crutches for his mobility at home. At that time, Ne was unable to perform his daily living activities as well as his farming and labor jobs. The family’s survival depended on his wife and he felt sad that he was unable to contribute. After he finished his TB treatment, he came to the Kratie Physical Rehabilitation Center of Veterans International Cambodia for further rehabilitation treatment.

After an assessment conducted by clinical staff, Ne was treated in the center to strengthen his muscles, passive movement of lower limb joints, stimulate sensation, provide gait training on parallel bars, and trained to transfer from a wheelchair to a bed. The clinical staff also provided training to his wife on transfer rehabilitation techniques so that she could continue the training at home in conjunction with his regular visits to the center.

Through the community based rehabilitation programs of Veterans International Cambodia (VIC), CBR workers and technical staff regularly followed up with Ne at home to monitor his progress and provide home based rehabilitation for him. Also, because Nam Ne’s family was very poor, the family was eligible for a small grant to offset the loss of Ne’s income. In September 2014, VIC was able to provide Nam Ne with a small grant to buy a set of fishing nets which enabled him to fish in a river near his house. With this assistance, he can now bring in more income for his family on a daily basis. 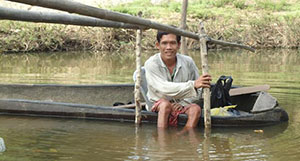 In addition to this rehabilitation and monetary success, discrimination against him because of his medical problems has also reduced, his physical health is improved, he is able to participle in social activities, and he can maintain a reasonable standard of living compared to others in his village.

Due to early intervention, participation from family in treatment, proper care, appropriate device prescription, and home based rehabilitation, Nam Ne was able to remain a productive member of his family and society. Community based rehabilitation through VIC, with the support of donors, has improved his quality of life. Nam Ne and his family are grateful for the help from VIC, it has changed their lives and they are forever thankful.