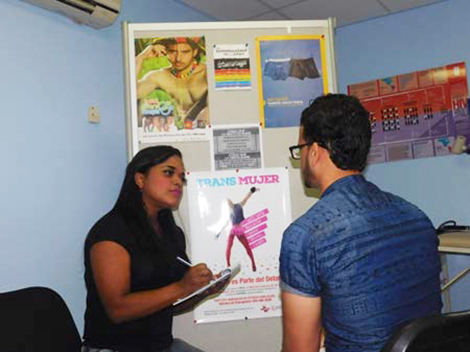 José Julio is a 24-year-old cheerful and talkative man who lives in a populous neighborhood of Santo Domingo, the capital of the Dominican Republic. He recently enrolled at a university to study medicine.

"I came to this clinic [IDEV] accompanied by a peer promoter from the Gente Activa y Participativa (GAYP) organization, which conducts HIV-prevention activities for men who have sex with men (MSM) and transgender persons in various neighborhoods of Santo Domingo," explains José Julio. GAYP accompanies MSM and transgender persons to the HIV testing services that are offered at the IDEV clinic.

At IDEV, José Julio has access to services including clinical assessment; CD4 and viral load tests; psychological support; counseling for adherence to treatment; and diagnosis, treatment, and monitoring of sexually transmitted and viral infections (human papilloma virus, syphilis, hepatitis B and C), and tuberculosis.

One reason that José Julio has been able to adhere to antiretroviral therapy (ARV) (and consequently an undetectable viral load) is the personal attention he regularly receives at IDEV. For example, he has received counseling from Estefania Hernandez, a trans woman who works as a peer counselor and navigator at IDEV. "I always tell the boys that adherence not only depends on regular visits to the doctor, but also on the package of positive prevention services that we offer, which includes condoms and lubricants, counseling to help them disclose their serostatus, and working with couples," says Estefania.

José Julio explained, "adherence to treatment is basic ... you feel an achievement on a personal level."

Estefania said that IDEV's best practices include an early warning system, which allows staff to rapidly identify and contact patients who have missed an appointment. "If a patient does not come to his or her appointment, we immediately call, and if necessary, we send someone to do a home visit. These visits are possible thanks to the work of the GAYP promoters."

Other people living with HIV who receive care at IDEV have also achieved good adherence to treatment, thanks to the quality management system implemented by the APC project. 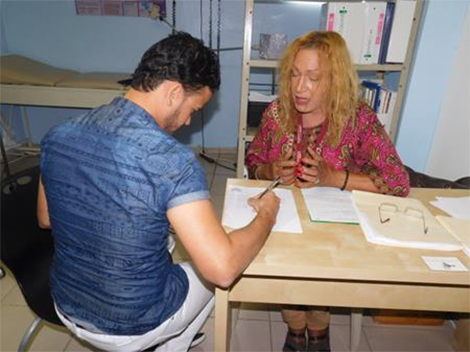 Dr. Pedro Reyes, who is responsible for Jose Julio's care, says, "We have tools to measure the quality of our services, and to determine the gaps in the 90-90-90 strategy. We have substantially improved the quality of patient registration records, making it easy to obtain accurate and high-quality data. We have a database that allows us to monitor patients' CD4 and viral load test results. In addition, with USAID support through the APC project, we are implementing a mechanism to measure adherence to treatment and cross this information with viral load."

IDEV also has an anti-discrimination policy as part of the quality management system. "All our staff are trained to address stigma and discrimination. We have an anti-discrimination code and an anonymous reporting mechanism for our patients to report any kind of situation that violates their rights," says Dr. Carlos Adon, director of clinical and community services at IDEV.

The story of José Julio is an example of how IDEV, with support from USAID through the APC project, is contributing to reaching the 9090-90 targets in the Dominican Republic. IDEV data from February 2016 show that:

The chart below shows the average proportion of IDEV patients with viral load <1,000 copies compared to patients in other clinics. 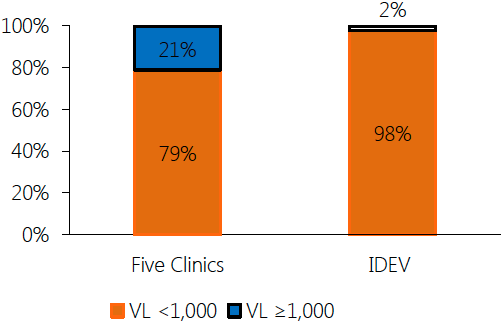 The following chart illustrates IDEV's HIV-positive MSM patients through the HIV treatment cascade during the first semester of the 2016 fiscal year. 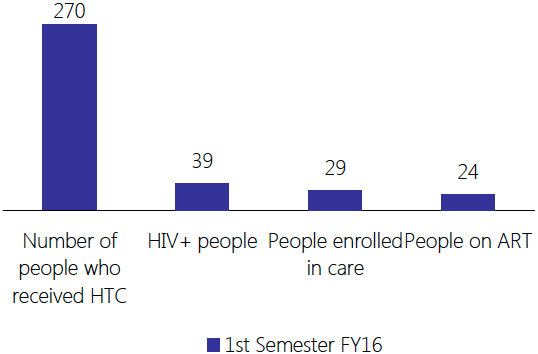 As illustrated by Jose Julio's case, IDEV, by improving the quality of life of key populations and of all people living with HIV, is a model for achieving the 90-90-90 goals.

IDEV's progress is the result of quality management processes along the HIV treatment cascade that are based on best practices such as:

"Ever since I came to IDEV six months ago, everyone has treated me well. I remember that during my first appointment, they asked the first thing that came to mind when I heard the term HIV and AIDS was, and I said ‘to try to overcome this problem,'" says José Julio. If he was asked the same question today, he says he would answer:

"HIV is not a death sentence, but a chance to live."