Making a living and improving the lives of my compatriots. 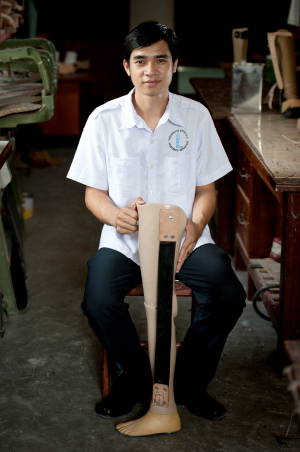 Ki with a prosthetic leg that he made.

My name is Sybounheuang Sansathit, but everyone calls me Ki. I am a prosthetist and orthoptist (P&O) at the Center for Medical Rehabilitation in Vientiane, Laos. I see about 15 patients per week. I enjoy working with people with disabilities and seeing my clients smile after their new device is fitted. I am so lucky because my job not only supports my family; it also supports the families of the people I treat.

I was born and grew up in Xiang Khouang in north-eastern Laos, a province that was heavily bombed by the Americans during the “secret war” that took place in parallel to the Vietnam war. The most common ordnances used were cluster munitions, containing hundreds of high-explosive bomblets, known in Laos as “bombies.” U.S. bombing data indicates that more than 270 million bomblets were dropped on Laos. With a failure rate of 10-30 percent, an estimated 80 million remain on the ground and could explode at any time, contaminating 25 percent of Laos’ villages, and 14 of its 17 provinces. Growing up, I saw many UXO victims; people who had lost their legs, arms, or both. Because of their disabilities, they could not work, were poor, and could not join social activities. I saw them suffer and wanted to help. That’s why I decided to study prosthetics and orthotics.

I got a scholarship from the Nippon Foundation through the Cooperative Orthotic and Prosthetic Enterprise, a Lao nonprofit organization that partners with the Centre for Medical Rehabilitation to give people with physical disabilities local, free access to high-quality nationally-managed rehabilitation services. I studied at the Cambodian School of Prosthetic and Orthotic from 1999 to 2002. I returned to Laos for on-the-job training and practice, and worked for one year in each of the rehabilitation centers in Champassak, Pakse, and Xiang Khouang Provinces. In 2005, I was accepted at LaTrobe University, and got another Nippon Foundation scholarship. I graduated in September 2007 with a B.Sc. in P&O. As a Category 1 P&O diploma, I am one of the two P&O in Laos who have qualifications recognized by the International Society for P&O.

One of the main challenges I face in my job is that because of limited resources, we can’t always offer rehabilitation services at the level that patients need. For instance, because of the lack of qualified P&Os, it takes us longer to fabricate a prosthetic device than in other countries. Many of our patients are poor, subsistence farmers, and having to be away from their fields for two or three weeks while waiting for a device is a huge financial sacrifice.

Despite the occasional frustration, I love my job. My parents had a furniture shop, and when I was young I spent a lot of time helping my father in the workshop. I liked working with tools and machinery, making things. In a way, I still do this. But I do much more too, because I work with people!

I still recall a 25-year-old woman who arrived at the center one day. She had lost all four limbs because of a vascular disease. Her eyes were so sad, they had lost their shine and sparkle. All that was left was a dull, bleak gaze. She stayed at the center for six weeks while she learned to use the artificial legs and arms that we made for her. I will always remember her face when she walked again for the first time. It was as if she was reborn.