The Champions for HIV Prevention 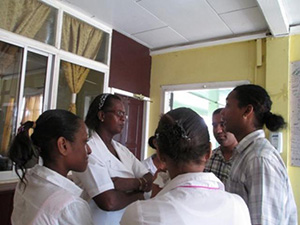 Aashish is a 43 year old men who have sex with men (MSM), an alcoholic, and a chain smoker. He is also a steady client of male sex workers. He has had multiple partners with whom he engages in unprotected sex. After being approached on numerous occasions by the outreach officer at Family Awareness Consciousness Togetherness (FACT), he tested positive for HIV.

“I lost many of my family members such as my brother and many close friends to this disease so I decided to visit FACT.”

On his initial visit to FACT, Aashish was enrolled in a support group for MSM, which met off-site at the homes of enrolled MSM. In group discussion, he was educated with his peers on the benefits of consistent condom use as well as the importance of good nutrition and healthy food choices. He was also individually counselled on the likelihood of dying young because of alcoholism and cigarette smoking.

“I felt secure at FACT because of the warm environment and the friendly staff” he said.

Aashish was assured that his HIV status would be kept confidential and because some of the staff at FACT were also MSM, he felt that he could trust them. FACT included Aashish in small activities so that over time he developed a sense of belonging, eagerly learning from the group sessions and individualised counselling. He began changing his lifestyle and even found a job.

“I settled with one partner, use condoms every time I have sex, eat only foods recommended by my doctor because I was on antiretroviral and I got a job. I then realized that I could be a positive role model for my peers. I become an opinion leader. Because I am a role model I am forced to not drink alcohol or smoke.”

Aanish’s peers, noticing the transformation, inquired about the cause for his change. Aashish educated them on the impact of their risky behaviours, the progression of HIV to AIDS, the role nutrition plays in preventing AIDS, the advantages of consistent condom use, and the likelihood of an earlier death if they did not change their behavior.

Aashish’s persistence in educating his peers and the example of his adoption of a healthier lifestyle inspired his peers to get enrolled in care. The integration of Aashish in FACT’s prevention team as an opinion leader and role model provoked positive changes in his friends, now enrolled in care and support. To date, ten of these clients have emerged as opinion leaders and are responsible for increasing the numbers of MSM enrolled at FACT.

Between October 2013 and March 2014, FACT reached 367 MSM with sexual prevention services. Further, MSM constituted 29 percent of individuals tested. They all tested negative. FACT is responsible for 66 percent of the overall MSM served through APC Guyana grantees. Learn more about FACT and the work being done to empower and preserve families in Guyana.