New Dream of a Victim from Violent Protest 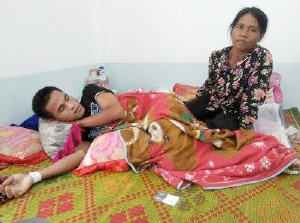 Hoeun Chan, 27 years old, was a fourth year student of a university in Phnom Penh before he was accidently hit by a bullet in his back during a garment factory worker protest that turned violent on November 12, 2013. His parents were living in YeangThom village, ChiPhoch commune, Mesang district, Prey Veng province. When he finished high school in the province, he came to Phnom Penh to continue studying in a university in the field of marketing and was renting a room he shared with his friends near the scene of the clash in a suburb of the city. An ordinary day with an extraordinary ending changed Hoeun Chann’s life forever.

As he was walking to university, Chann turned back to collect some forgotten documents not realizing that these would be his last steps. A snap decision to take a shortcut back to his house led him unknowingly into the heart of what had intended to be a peaceful garment factory demonstration. Walking head on into the ensuing violent clashes with military police who were using AK47 rifles, Chann unsuccessfully tried to escape the area and was caught in the crossfire. Chann was shot in the back and in this sudden, life altering moment Chann became paralyzed from the waist down. Chann was taken to the nearest clinic by onlookers, where he was turned away because the clinic did not know how to treat him. Chann was then transferred to another hospital, yet he still did not receive the care he needed. He remained in the dark about his condition for a further 2 weeks before finally hearing from doctors that he had suffered a spinal cord injury and was paralyzed from the waist down. He would never walk again. 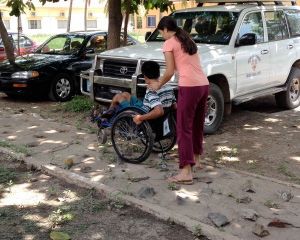 Chann's mother would not accept this fate for her beloved son. She knew that living with a disability in Cambodia would not allow him to fulfill his dreams to finish university (he had already completed 3 years) and become a professional. Knowing the future struggle for her son, Chann's mother went in search for a cure. She was informed that a surgery in Vietnam could cure Chann's injury. Making huge financial sacrifices, they took this leap of faith, selling 2 out of their 3 cows, their farming livelihood. This gave them $500, but they were still $4,000 short to afford the trip to Vietnam. With little choice, they took out a loan for $4,000, with interest growing at a rate of $100/month.

The surgery performed in Vietnam was unsuccessful. Furthermore, it is uncertain as to what surgery was performed in Vietnam as none of Chann’s personal medical information was released due to political reasons. Unfortunately, the only thing Chann came away with was severe pressure sores on his bottom and legs. Chann then returned to Cambodia and thankfully became involved with human rights NGOs who referred him to Veterans International Cambodia (VIC) for further intervention. 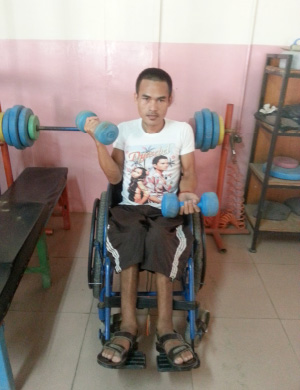 Chann arrived at VIC in February, 2014, where an initial assessment was performed by the clinical staff and 3 expatriate volunteer physical therapists. At this point in time, Chann had very weak abdominal muscles, poor sitting balance, severe pressure sores on his sacrum and legs, and had little education concerning his condition. He was also unable to perform bed mobility transfers, or wheelchair skills independently. He required assistance to perform the simple activities of daily living, and was depressed due to his lack of independence. Chann has been treated by clinical staff and volunteer physical therapists since he first arrived to VIC. They gave him treatment for 1-2 hours almost every day, in order to maximize his functional potential.

Upon his arrival, Chann received a manual wheelchair that immediately gave him great independence. He was also prescribed an intense rehabilitation program that included therapeutic exercise to strengthen all innervated muscles, bed mobility training, transfer training, balance training, wheelchair skills training, wound care, education on his condition and how to manage it. Today, Chann is still treated and continues to make great gains due to his high level of motivation. When not having therapy, Chann performs his home exercise program in the physical therapy gym, practicing his wheelchair skills outside, playing wheelchair basketball, etc. 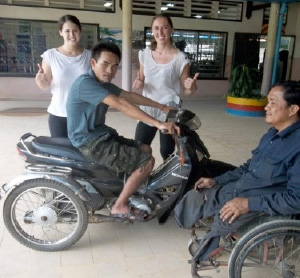 Chann is close to being discharged from VIC, but this does not end their relationship. He will have regular follow ups concerning his progress and in order to manage his wheelchair. He has made great gains while at VIC, and is now independent with all bed mobility, transfers from high and low levels, sitting balance, activities of daily living (dressing, bathing, self-care, etc.), and necessary wheelchair skills (e.g. wheelies, ramps, curbs, uneven surfaces, floor transfers). For activities that he cannot perform alone, he is able to direct people to assist him properly (e.g. stairs, abnormally high curbs or steep ramps, transfers in and out of a tuk tuk). Also, during his time at the center, his pressure sores have healed on his legs and the sore on his sacrum is close to being healed. 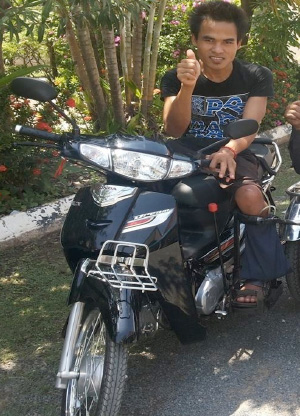 Chann’s Physical Therapists knew that he needed more than just therapy and a wheelchair to live his life fully. One of his main goals is to be able to commute independently and attend his final year at university. Therefore, his 3 volunteer therapists put together a fundraiser for him and were able to purchase him a three-wheeled motorbike that will allow him to commute independently around Phnom Penh and Prey Veng. They also raised money to convert the area under his stilted house into an accessible bedroom for him.

To say the least, Chann is doing extremely well and has become much happier with his situation. Due to his time spent at VIC, he has been able to gain back his independence and plan for the future. Next year, Chann plans on studying English and also completing his university degree.

Independence is vital to a person’s sense of self achievement, and physical therapists can help their patients regain this. Chann faced many obstacles as a result of his injury and he needed to overcome them. He stated that he was extremely depressed and that his life seemed pointless before coming to VIC. Yet, with only a few months of physical therapy, a wheelchair, and a 3 wheel motorbike, Chann has regained purpose in his life. This is why it is so important for physical therapists to push themselves and to go a step beyond for their patients. With the help of his therapists, Chann went from lying on a mat for the majority of his day to being able to drive himself around Phnom Penh and regain his social life. Chann’s story is an inspiration and truly shows the difference that Veterans International Cambodia can make in a person’s life.