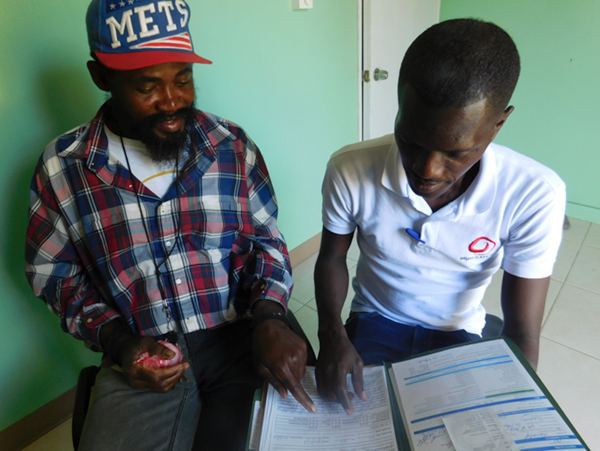 Arístides is a 40-year-old migrant who receives treatment for HIV at Muñoz Clinic, a satellite of the Center for Promotion and Human Solidarity (CEPROSH) in Puerto Plata province in the northern part of the Dominican Republic. Arístides never misses an appointment because, as he explains, "When you take the medication, your health improves and you live longer."

Under the U.S. President's Emergency Plan for AIDS Relief (PEPFAR), the United States Agency for International Development (USAID) provides financial support to the Muñoz Clinic through the Advancing Communities & Partners (APC) project for the provision of HIV care and treatment for migrant populations, most of who are of Haitian descent and live in very poor communities known as bateyes.

For Arístides, like other people living with HIV, keeping their appointments to pick up their antiretroviral medications (ARVs) and receive regular check-ups is critical to ensuring effectiveness of their treatment. However, at the end of 2017, 33 percent of Muñoz Clinic’s patients did not keep their appointments, and 20 percent had stopped antiretroviral treatment altogether.

Within the framework of the Quality Improvement collaboratives being implemented at the PEPFAR-supported sites with APC technical assistance, Muñoz Clinic organized a quality improvement team to find out why so many people were not staying in care. As the team conducted a root cause analysis of the problem, it came to light that many of these migrants move to different parts of the country for work, others return to their home country, and others simply forget their appointments.

In response to what they learned, the quality improvement team is applying the Plan, Do, Study, Act (PDSA) cycle for three months to try to help patients keep their appointments and stay on ART. The plan involves Creole-speaking patient navigators calling patients to remind them of their appointment two days in advance. The navigators also call those who miss their appointment as soon after as possible to see what went wrong and reschedule.

Every week, the quality improvement team monitors the performance of the PDSA cycle by tracking the total number of clinic appointments, the number of patients who keep them, the number who come late (within three days of their scheduled appointment), and those who do not keep their appointment at all.

As indicated in the graph below, from February through mid-March 2018, the initial period of this PDSA cycle, clinic attendance increased from 67 percent to 83 percent.

It is clear from this improvement that active follow-up with migrant patients via phone calls increases attendance at clinic appointments. Arístides says he is very happy with the efforts of the Muñoz Clinic staff to remind him of his appointments because this also gives him time to get permission from his job and arrange transportation to the clinic.