Patient Gets Dialysis Under the Free Health Care Initiative 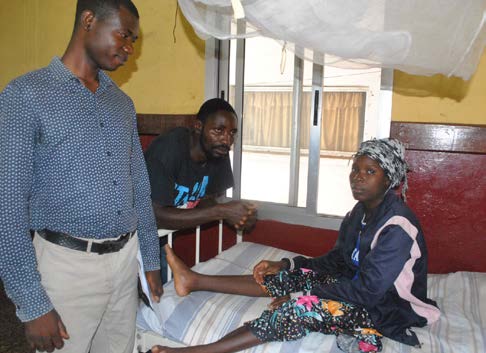 Mariatu Conteh, a pregnant 26-year-old, came to Pujehun Government Hospital in the southern part of Sierra Leone for antenatal care. The routine checkup revealed that she had preeclampsia, a dangerous condition for mother and baby, characterized by high blood pressure. Mariatu was admitted and later that day she was induced at the hospital but unfortunately she lost her baby and was later discharged and allowed to return home. Barely two weeks later, Mariatu was re-admitted to the hospital where doctors diagnosed her with hypertension, oliguria, and anemia. Her situation deteriorated rapidly and doctors advised for her immediate referral to tertiary-level care for treatment.

In Sierra Leone, the referral process can be long and challenging, but thanks to Momoh Brima, Pujehun’s district Referral Coordinator (RC), Mariatu was quickly transferred to Princess Christian Maternity Hospital (PCMH) in Freetown, where Momoh coordinated with his RC colleague to make the transfer as smooth as possible. At PCMH, Mariatu was diagnosed with acute renal failure, which required her to be under the care of a nephrologist—a kidney specialist, which they did not have at PCMH. This meant that Mariatu needed to be transferred to Connaught Hospital, Sierra Leone’s biggest referral hospital. Momoh worked with his RC counterpart at Connaught to facilitate Mariatu’s onward transfer so she could get the care she needed.

At Connaught, Mariatu received treatment from a specialist physician and had a number of tests to determine her condition. All her tests were done free of charge under the Free Health Care Initiative (FHCI), except for the abdominal ultrasound, which Momoh paid for to help Mariatu. The results of Mariatu’s tests revealed that she was suffering from parenchyma renal disease.

With her dire situation and her life at stake, the nephrologist at Connaught Hospital ordered urgent dialysis. However, just one treatment costs 1,125,000 Leones (or about US$150), which was more than Mariatu could afford. To make matters worse, she required three treatments of dialysis.

Although she could not afford the cost for her treatment, Mariatu was lucky that she had just given birth and was therefore covered under the Free Health Care Initiative, which provides free medical services before and after pregnancy. The RC, the medical superintendent at Connaught, and the nephrologist provided Mariatu’s services, including dialysis, free of charge under the FHCI, knowing well that she would have died had she been sent back to PCMH without the treatment.

So far, Mariatu has received two treatments of dialysis and she is currently recovering. As the first patient to get dialysis under the FHCI, she owes her life to the efforts of the RCs who coordinated her referrals and helped her get treatment under the FHCI. Their intervention saved the life of this mother, who had already gone through the traumatic experience of losing her child during childbirth.

The story of Mariatu not only highlights the need for improvements in health system strengthening in Sierra Leone, but also demonstrates that gaps between demand and supply in health service delivery can lead to unnecessary deaths of women and children.

To help address some of these health care challenges in Sierra Leone, JSI’s Advancing Partners & Communities Ebola Transmission Prevention and Survivor Services Program—Strengthening Health Services Post-Ebola (SHSPE) project, with funding from the United States Agency for International Development (USAID), has been supporting the Sierra Leone government’s Comprehensive Program for Ebola Survivors (CPES). CPES, which is jointly led by the Ministry of Health and Sanitation (MOHS) and the Ministry of Social Welfare, Gender and Children’s Affairs, ensures that EVD survivors receive the necessary social and medical services they are entitled to, following the presidential mandate in 2015, which brought EVD survivors under the FHCI.

Through the SHSPE project, USAID supports CPES implementation, through partners like King’s Sierra Leone Partnership, to ensure that the health system is equipped and able to respond comprehensively to the specific needs of EVD survivors and other FHCI target populations. The project’s multifaceted approach helps to increase access to services at primary health care facilities and support the establishment of a referral system for specialty services, such as mental health, neurology, rheumatology, and ophthalmology, through the services of RCs. As part of the program, RCs and Clinical Training Officers are seconded to each District Health Management Team as essential positions that support quality clinical services and referrals for EVD survivors and other vulnerable populations identified by the MOHS under the FHCI.

The SHSPE project has made it possible for conditions like that of Mariatu’s to be addressed through the referral system, which links demand to supply for the FHCI populations, thereby assisting vulnerable patients to access needed health care. JSI continues to work with the MOHS and other stakeholders to develop and implement systems and tools that establish evidence-based quality health services, and promote healthy behaviors and resilience.