The Road to Recovery in Masoko-Mayoni 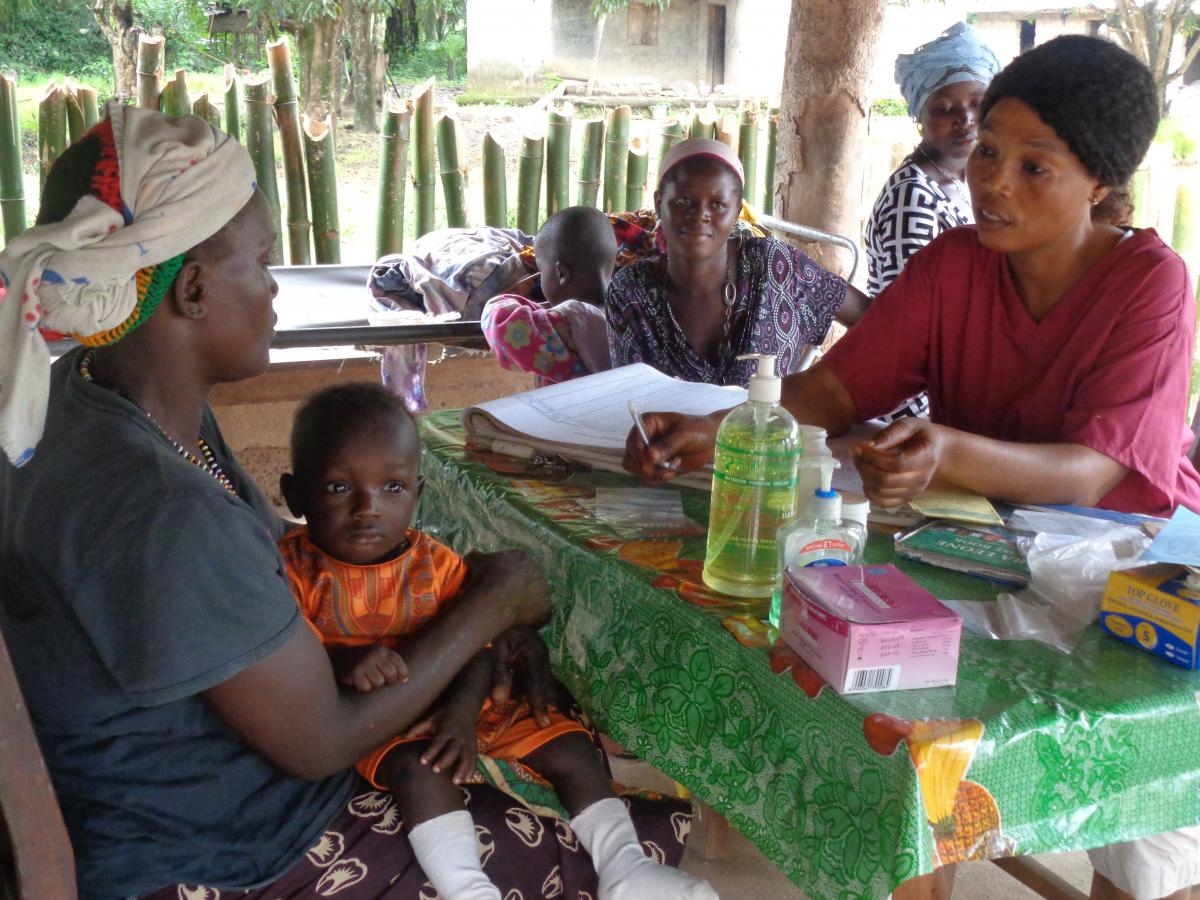 “Taking over the Masoko-Mayoni facility at the height of the Ebola outbreak was a trial between life and death, but I took the challenge to save my people,” says Fatmata, a maternal and child health (MCH)-aide and health post in-charge who vowed to re-establish services at the non-functional Masoko-Mayoni health post.

Ebola had a dire effect on the Masoko and Mayoni communities, which are located in Kholifa Rowalla Chiefdom in the district of Tonkolili in Sierra Leone. The health worker (HW) in charge of the health post died in September 2014 after treating an infected patient who left a quarantined home in the nearby city of Makeni. The loss of the HW resulted in the facility’s closure for more than five months. Even after the facility reopened, the community remained in fear of contamination and contracting Ebola at the health post.

Fatmata assumed responsibility for the Masoko-Mayoni health post in February 2015, leaving behind her own community to help one with a greater need. Though she had worries about her new position, she remained inspired by reminding herself that she had signed up to save lives.

“To overcome the fear I had, I constantly told myself that it was the will of God, as I had worked with the late in-charge at a holding center where we were constantly dealing with suspected Ebola cases, but we survived it," says Fatmata.

When she first took over the health post, Fatmata had two primary concerns. First, she had to adapt to its poor working conditions. The state of the health post was deplorable; the roof leaked, and it lacked waste pits, proper toilets, and water. Second, the facility had very poor attendance from its catchment communities. Fatmata had to find ways to rebuild community trust to boost health recovery efforts and improve health care-seeking at the facility.

Fatmata conducted house-to-house visits across Masoko and Mayoni, stressing the need to visit the health facility when sick or pregnant, instead of staying at home and self-treating. She rode a motorcycle to the villages that were further away to instruct people on best hygiene practices and facility services. She also strengthened links with community health workers (CHWs) and traditional birth attendants (TBAs), who refer community members to health posts and promote healthy behaviors. Because of Fatmata’s in-person appeals, community members better understood her desire to help, and they began seeking care at the health post.

With support from the United States Agency for International Development (USAID), the Advancing Partners & Communities project added a placenta pit, ash pit, sharps pit and incinerator, constructed a water tower and tank with a solar pump, and piped water into the facility. The labor room now has a toilet with running water. The staff quarters at the Masoko-Mayoni health post were also renovated so that a health worker would be onsite at all times. The project included the facility management committee (FMC)—which links the facility and the community and provides monitoring and maintenance support—in the renovation process. The FMC persuaded community members, one of whom had survived Ebola, to contribute materials to build a perimeter fence around the health post.

Aruna, an Ebola Survivor engaged in the facility perimeter fencing expressed,“My community initially thought I posed a threat and discriminated against me, but through the community engagements we are but one happy family now.”

The project is supporting the training of three facility health workers in maternal and child health interventions and on infection prevention and control. This is complemented with follow up supervision and the supply of minor medical equipment.

Fatmata expressed, "I feel fulfilled that I took the risk to lead a health post that had lost its health worker to Ebola and succeeded in bringing people back to the facility. That means they trust me. This is not so easy to do but when you have the health of your people to secure, you do it with every pleasure. I’m happy I did it.”

“My community initially thought I posed a threat and discriminated against me, but through the community engagements we are but one happy family now.”

The health care-seeking behaviors of the Masoko and Mayoni communities have greatly improved; the number of patients has increased from around 100 per month during the Ebola crisis based on estimates provided by Fatmata (National data incomplete) to 406 (May 2016). Fatmata helped create a network of community health care advocates, including CHWs, TBAs, and FMCs, to convey important health care-seeking messages to people in hard-to-reach areas. Furthermore, the community’s involvement in the renovation and maintenance of the health post has contributed to its sense of ownership. The trust and confidence that Fatmata and her team, in conjunction with the Advancing Partners & Communities project, have built has strengthened health service delivery in these communities.