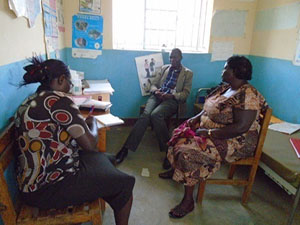 Globally, approximately 12 percent of married women have an unmet need for family planning (FP)1, however in Uganda this number is almost three times as high, with 34 percent of currently married women having an unmet need for FP services, 21 percent in need of healthy timing and spacing, and 14 percent in need of assistance limiting their total number of pregnancies 2. In the Eastern and East Central regions of Uganda, the need for FP is exceptionally high because this region has the highest number of teenage births in the country.

To respond to this unmet need, the Salvation Army Integrating Family Planning (SAIFaP) Project organized mobile outreach activities within the community in the Butaleja and Budaka districts of Uganda, which fall within the East Central Region. These outreach activities were implemented to provide vital health services in hard to reach areas. On both occasions, FP outreach activities were integrated with other health services including health education, nutrition, counselling, HIV/AIDS, and sanitation and hygiene. SAIFaP’s outreach activities have increased access to FP and awareness of the benefits of FP and healthy timing and spacing of pregnancies. Lower level health centres are often the nearest and most accessible location for women in rural areas to access their health services. Offering a variety of FP methods at the lower health facilities and providing detailed information to clients about all methods allows them to make an informed choice, improving their overall health and well-being.

The project’s outreach activities have increased the use of FP in these two districts and helped combat misconceptions about FP throughout the country. Mr. Isaac Kimbugwe, the Clinical Officer of the Namusita Health Centre III, said the months of January 2015, and February 2015, had a total of 34 new acceptors, 23 revisits for Depo-Provera, and 13 clients who received long acting family planning methods. The health centre received long term family planning methods from the team for the first time during SAIFaP outreach activities in December 2014.

In one instance, a woman who was currently using Depo-Provera said she conceived a second baby because community members had told her she would not be given a FP method in the hospital until the return of her menstruation. Unfortunately, she conceived before she began menstruating again. However, after being referred by a SAIFaP trained Village Health Team member (VHT), she went to the health center, the health worker advised her to begin FP a month and a half after the birth of her second child and informed her that longer acting methods were available. Now, this woman wants to change to a longer acting method when it is time for her Depo-Provera reinjection. Like her, many mothers are happy now that they can control and delay pregnancy following the availability of different methods at their disposal.

As a result of the outreach activities, there is an increased demand for FP services in the Eastern region and mothers in the communities are now aware of the risks of poorly spaced pregnancies and want to take charge of their reproductive health. Many women are gaining interest in long acting family planning methods to avoid the revisits every three months, creating demand for long acting contraceptive methods. Overall, approximately 200 clients were reached, and 2,047 male condoms, 45 female condoms, 11 implants, 15 Depo-Provera injections and 9 combined oral contraceptive pills were provided.