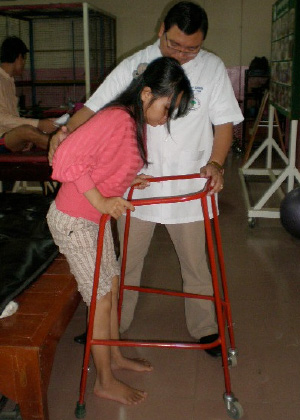 Ros Sokhom is a 34 year old female who lives with her husband and a son in Prek Pra commune, MeanChey district, Phnom Penh city. One day in June 2011, Sokhom fell down from the top stair of her house from a height of about 4 meters, which caused her a severe spinal cord injury. Her family immediately brought her to a hospital for treatment, where she was diagnosed with a devastating spinal cord injury in her lumbar spine. She received surgery and remained in the hospital for nearly two months. Once she was discharged she went home to a completely different life.

Before the accident, Sokhom had a small hair dressing shop that made enough daily income to support her family. But after the accident she faced limitations in moving around and performing daily activities. She considered her life very difficult and required the assistance of her family for even the simplest activities, as she was unable to sit or stand independently. Her husband considered her completely dependent and could not deal with the burden of care giving for his wife. Due to this financial and emotional crisis, Sokhom’s husband abandoned her which caused her to have to live with her mother again. Due to the circumstances Sokhom entered a deep depression; her accident had taken away any hope of a bright future. 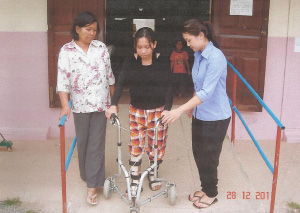 Nearly 5 months after her accident, Sokhom’s mother brought her to Kien Khleang Physical Rehabilitation Center (KKPRC) of Veterans International Cambodia (VIC) for further treatment. After a clinical staff assessment it was advised that she would benefit from physical therapy treatment. The clinical staff not only gave her interventions to make her more functional and independent, but also helped her become happier. Her sessions included some counseling that helped Sokhom gain a new perspective on her condition. She found motivation to get better and was now able to see a future for herself. To say the least, the physical therapy intervention given was successful, Sokhom was much happier and after a few months was able to sit and stand by herself. She was prescribed orthoses (bilateral AFOs) to support her legs and prevent foot drop and a wheel walker. With these assistive devices Sokhom became more functional and was able to walk on both even and uneven ground. With this gain made, Sokhom was able to walk again. 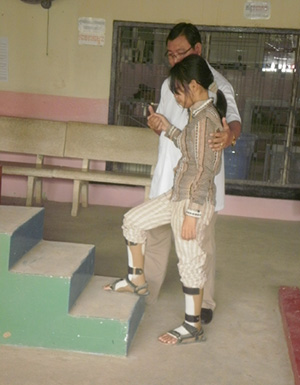 Sokhom was prescribed home visits every 2 months to monitor the treatment plan and the progress of her daily living activities. She was given a home exercise program by physical therapists (PT) and community staff to ensure that her assistive devices are working properly.

Due to the PT and PO interventions given to her, Ros Sokhom is now able to walk independently with assistive devices. She no longer needs someone to help her for simple activities of daily living. She can continue her job as hair dresser to make income, and later, Sokhom’s husband returned back to live with her because he saw her like his wife before. She is now living a much more fulfilling life, as she no longer depends on the assistance of others. 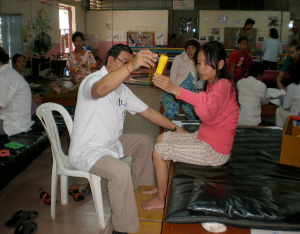 Independence is vital to a person’s sense of self achievement which is something physical therapists can help their patients regain. Specific physical therapy intervention, appropriate devices prescription, and family counseling are critical to the success of the treatment. When a patient’s independence is taken away from them, it affects their psychological state greatly. By teaching Sokhom how to care for herself and by giving her encouragement and motivation, Sokhom became much happier. Commitment and collaboration can make the difference in a patient’s life.