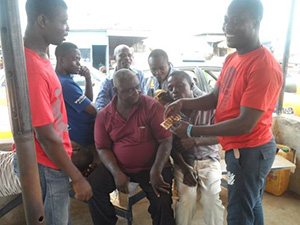 Frank Fianu educating his colleagues on condom use.

The contraceptive prevalence rate (CPR) for modern family planning methods in most rural and underserved communities in Ghana is far from satisfactory. Often these areas are not only hard-to-reach but also require travel over large distances in order to reach a relatively small number of people—and often with lower purchasing power. This makes it difficult to establish a commercially viable distribution system for family planning and HIV prevention products. In response to these challenges, the HealthKeepers Network (HKN) program has been designed to focus on hard-to-reach populations in rural and underserved communities.

The HKN program trains distributors, known as “HealthKeepers,” who directly sell health-promoting products and counsel customers. However, HKN recognized that male involvement in family planning and HIV prevention is low in many parts of Ghana. HKN initiated outreach to work with commercial drivers—known as StationGuards—to promote a healthy lifestyle and provide their peers with reliable access to health protection products and services. Since the inception of the project, 70 station guards have been trained.

“Educating men could also facilitate an enabling environment where decisions and responsibility for family planning could be shared more easily. Seeing them actively participating in the training, and beginning to accept that they also have a role to play, if family planning programs are to be successful, is very encouraging.” - Marcia Halm, HealthKeepers Network

During the training sessions participants are divided into groups to discuss the benefits of family planning to men, women, youth, and the community after which a member from each group presents to the group and receives feedback. There are a number of role-plays where the men are able to practice how they will sell their condoms, contraceptive pills, and other products. Discussions also include evidence-based strategies for selling their products.

After the training, drivers are enabled to distribute condoms, water-based lubricants, and oral contraceptive pills. In addition to their initial product supply, each StationGuard is provided HealthKeepers branded t-shirts, branded bags, and HealthKeeper stickers to be posted on vehicles.

The StationGuards have seen changes in their colleagues. “At first they used to talk about football, politics, etc. during their free time…but now during their free time, we discuss about other things, a little of family planning benefits crops in.” Michael Obeng Debrah, Old Barrier taxi rank. Though some fellow drivers were skeptical or sometimes teased the StationGuards about their condoms, many have noticed a shift in their attitude towards family planning. “Some of the drivers who said they knew about condoms but did not use them because they did not enjoy sex with condoms are now purchasing condoms from me,” Nicholas Odame Kwakye, taxi driver in Ashaiman. The StationGuards appreciate the opportunity to educate drivers at their stations, as well as friends, church congregations, and others in the community. 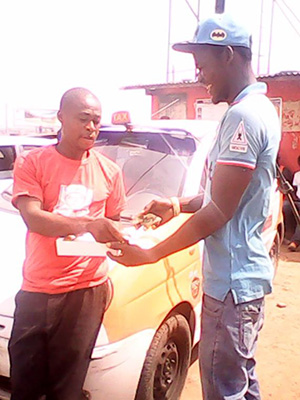 “This programme has made me very popular in this area. My colleague drivers call me ‘condom man.’ People rely on me to supply them with condoms and other health products and I feel happy. Some people stop me by the roadside to ask for condoms.” – Frank Fianu, taxi driver at the Afariwa taxi rank in Ashaiman

While only drivers were trained during the first two cohorts, it became apparent that since drivers have to concentrate on driving while the vehicle is in motion, counseling on family planning and other health issues with passengers can be challenging. Training now includes attendants, known as “drivers’ mates,” who are responsible for guiding passengers on board and collecting fares to facilitate more discussion.

At the initial monitoring visit to oversee their activities, HKN found that the drivers had sold all their initial supplies of condoms and lubricants—some had even sold out their initial supply of oral contraceptives pills. HKN is monitoring the drivers to learn more about how this non-traditional channel made up of men can be used to promote family planning and HIV prevention through a peer distribution model for condoms and oral contraceptive pills.