The Story of a Champion 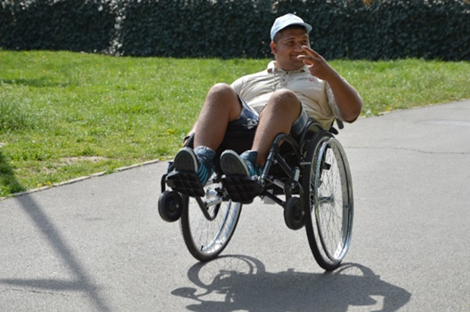 Marius in his new wheelchair.

When Motivation Romania Foundation (MRF) met Marius, he was shy, not ready to use a wheelchair, and still looking for explanations. One year later, Marius left the MRF sports camp with a gold medal for wheelchair basketball and archery. More importantly, he had gained the confidence to show himself to the world.

Marius is 19 years old and lives in a Roma community in Maglavit, Dolj County. Two years ago he began to lose his sensitivity and mobility. He was afraid and didn't understand what was going on or why. He and his family desperately looked for answers and visited many physicians, but nobody could give Marius any hope. So he decided to stay in his house and wait for whatever was happening to pass― but it never did. He began using a walker but as he lost mobility he had to look for a wheelchair. Marius was ashamed to go outside and see his friends. He felt like a burden to his family and community. 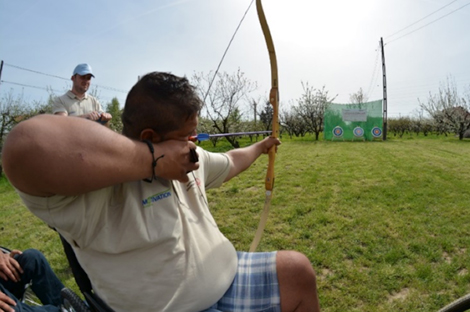 The MRF team from Mehedinti met Marius in April 2015 and offered him a wheelchair and information on how to use it to get his life back and be active again. Marius accepted the wheelchair but was not ready to accept their advice. Besides, his doctors had said he should not participate in an active rehabilitation program until they were sure about his diagnosis. But MRF stayed in touch with Marius, and a few months later, the team noticed that Marius had changed many things about his lifestyle―he lost weight and was spending his money on healthy food and medicines prescribed by his doctors.

In September 2015, Marius joined an active rehabilitation program organized in Bragadiru. He impressed the trainers with his interest in learning new things. He was always the first one to wake up and the last to go to sleep. He learned mobility skills for maneuvering in a rural area, where the lack of accessibility is a major problem (when his wheelchair broke because of the hills and pits that he has to navigate every day, MRF replaced it). And he excelled in team and individual sports, and has the medals to prove it. 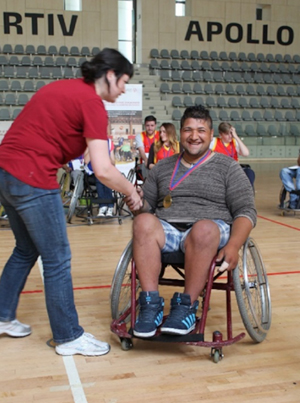 Marius excelling in his wheelchair.

With all he has accomplished, Marius understands that people look beyond the mobility equipment and see the man he has become.

The MRF …program was the greatest time of my life. I love your team. They gave me hope and my life changed…The first thing I did after I received the medal was to call my grandmother. My parents are divorced and she was always my support. You know what she did? She burst into tears when she heard that my team won the wheelchair basketball competition. I could not wait to go home and show her. All my friends congratulated me. I posted some pictures on my Facebook page and I have more 'likes' than I could have imagined. I am very happy with the way my life turned around, thanks to you.