Test and Start in the Dominican Republic Benefits Key Populations 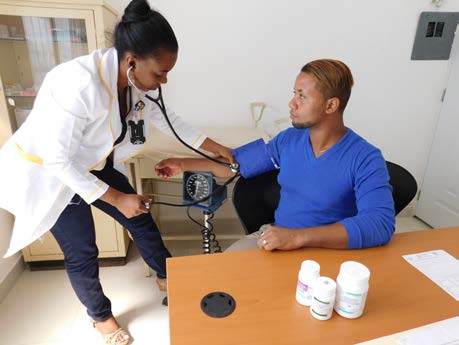 Twenty-five-year-old Richard, who identifies as a man and has sex with men, began antiretroviral therapy (ART) at the HIV clinic at the Lotes y Servicios Hospital in Santo Domingo seven days after his positive HIV diagnosis in early 2017. Miky, who is 30 and also gay, began ART at the Francisco Gonzalvo Hospital in La Romana only three days after receiving a positive HIV diagnosis earlier this year. Both men now have a suppressed viral load.

Richard and Miky are just two of the more than 7,700 people who received HIV services as part of the USAID-supported implementation of the Test and START strategy in Santo Domingo, La Romana, and Puerto Plata Provinces of the Dominican Republic.

In September 2015, the World Health Organization issued global guidance that anyone infected with HIV should begin ART as soon after diagnosis as possible, regardless of their CD4 count. The evidence supporting the Test and START strategy showed that HIV-positive people starting ART while their CD4 count is still high have a significantly lower risk of illness and death. Evidence showing gains in achieving viral suppression through early and effective ART for those diagnosed with HIV is increasing. There are indications that rapid initiation of ART (within 7 days of diagnosis) increases the probability of initiating ART and may improve long-term retention in treatment. Today, rapid expansion of Test and START is the cornerstone of efforts to achieve the UNAIDS 90-90-90 targets in the Dominican Republic.

Implementation of Test and START at the six PEPFAR/USAID-supported HIV clinics has reduced the window for treating patients from 30 days in early 2017, to an average of seven days by September, extending the benefits to patients and the health system.

“First I got some blood tests, then I received counseling about the treatment and got my medication,” says Miky, referring to his treatment timeline at the Francisco Gonzalvo Hospital.

Dr. Jael Silfa, the director of the Francisco Gonzalvo Hospital, sees Test and START as an improvement in the services provided at the HIV clinic. In her opinion, a suppressed viral load—which helps prevent transmission of HIV— is one of the biggest benefits of the strategy. Richard agrees, acknowledging that a timely test and treatment has allowed him to take care of himself and others.

Dr. Santos Céspedes, head of the hospital’s comprehensive care center, says that this strategy “allows patients to remain in good health from the moment they’re aware of their HIV status.” As he points out, “It also reduces morbidity and mortality. From an economic point of view, the government will eventually spend less on hospitalizations due to complications [from AIDS].”

Scientific research proves that Test and START reduces the number of new HIV infections and AIDS-related deaths. It also improves the quality of life for people living with HIV. Richard is quite vocal about his satisfaction with the services at Lotes y Servicios Hospital. “They explained that it is important to take the medication to reduce the virus in my body and strengthen my immunity,” he says. “They also explained the possible side effects of the medication.”

Richard and Miky care about their community. They are extending the opportunity for better health by referring their sexual partners to the HIV clinics at the Lotes y Servicios and Francisco Gonzalvo hospitals.