Treatment for All in the Dominican Republic

Diagnosis is not the end; it's the beginning of a new life 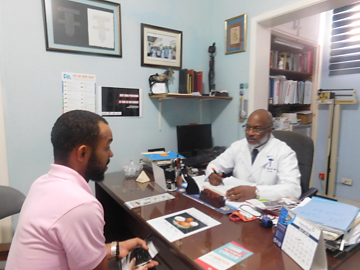 William is a 43-year-old man who has sex with men. He came to the Dominican Institute of Virological Studies (IDEV) HIV clinic in October 2017 at the behest of a community educator who convinced him to have an HIV test. The educator offered to drive William and four other young people from the neighborhood to the clinic. "I was the first of the group to get tested. I thought I was okay because I had no symptoms of illness or discomfort, but I turned out to be positive,” says William.

William says that a million things went through his head when he got the news. "You reach a point where you think that your life is over. After finding out my status, a transgender navigator named Stephania took me to her office and told me that I was not alone because she and a group of professionals at the IDEV clinic would support me every step of the way."

Since October 2016, IDEV has been implementing the WHO-recommended "Treatment for All" policy which involves immediate initiation of antiretroviral therapy (ART) for individuals newly diagnosed with HIV, regardless of their CD4 cell count. Starting treatment requires additional laboratory testing to rule out concurrent infections, as well as identification of risk factors that may affect a patient’s adherence to ART.

"I knew about HIV, but didn’t know there was treatment for it. After I received my lab work and had a counseling session with the psychologist about treatment adherence, the doctor prescribed my medication that same day," says William.

According to Dr. Carlos Adón, IDEV’s medical director, patients who are eligible for ART can start their ARV medications the same day. If a patient has an opportunistic infection, treatment is deferred for two weeks, but the average time from diagnosis to treatment is seven days.

From October 2017–March 2018, a total of 191 people started ART at IDEV (58.6% of the target for the year), of whom 184 (96.3%) were newly diagnosed with HIV during the period, and the remaining 7 (3.7%) were patients already enrolled in care at the clinic who transitioned to treatment. Of this total, 77 (40.3%) were men who have sex with men; 6 (3.1%) were female sex workers; and 101(52.9%) were other unidentified risk populations. With the support of the specialists at IDEV, William has come to understand and accept his condition, and even feel good about it. When he came to IDEV for the first time, William had a viral load of 22,622 copies/mL. Currently, his viral load is 48 copies/mL, which shows that the disease is under control (and is a result of his adherence to ART).

IDEV: No. patients diagnosed and initiated on ART by type of population, October 2017 - March 2018

As William says "IDEV teaches me to live a healthy life, accept my condition, take my medications, and to be more compassionate with those who are suffering."

William continues to work as a professional dancer and instructor, and no longer believes that his life is over. "I encourage all HIV-positive individuals around the world to adhere to their medication because it works. They should not see their diagnosis as a problem, but as a condition that can be managed."