In late March 2014, the WHO reported cases of Ebola Virus Disease (EVD) in southeastern Guinea. The identification of these first cases marked the beginning of the West Africa Ebola epidemic, the largest in history. The 2014-2015 EVD epidemic claimed over 11,000 lives across West Africa, with over 4,800 of these deaths occurring in Liberia. Throughout the course of the epidemic, there were over 10,600 EVD cases.i,ii

The Ebola outbreak brought heavy social and economic losses to Liberia. The country’s already vulnerable health system was devastated by the outbreak—routine health service provision and use declined due to health facility closures, health worker fears about contracting the virus,and the redirection of health workers to handle the outbreak. On January 14, 2016, WHO and Liberia announced that the country was Ebola-free, and no additional cases have been detected since.

In the months following the end of the Ebola epidemic, EVD Survivors reported that because health facilities wouldn’t accept them, they were forced to travel long distances to find facilities that would accept them, or they would go without getting care. Given JSI’s considerable experience providing clinical care and stigma reduction training, the ETP&SS program developed and included stigma reduction content within the clinical guidelines for EVD survivor care training curriculum. The program also provided stigma reduction and infection, prevention, and control (IPC) mentorship in the hospitals and clinics serving the largest number of survivors in each of the program’s focus counties.

ETP&SS Liberia operated in four priority counties—Bong, Lofa, Margibi, and Montserrado, as these counties account for over 90 percent of the population of registered Ebola survivors.iii Key program activities in these counties included monthly coordination with the county-level chapters of the National Ebola Survivors Network of Liberia (NESNL); training and mentorship on Ebola virus disease (EVD) Survivor Clinical Care Guidelines; clinical rotations and training provided through the Liberia College of Physicians and Surgeons’ Clinical Specialist Consultant Program; facility renovations and distribution of medical equipment prioritized during the November 2016 facility infrastructure assessment; and a one-time distribution of essential medicines for use by EVD survivors in target health facilities. The program has also carried out supplementary activities in the seven non-focus EVD-affected counties, specifically EVD survivor mapping and clinical guidelines training; these counties include Bomi, Gbarpolu, Grand Bassa, Grand Cape Mount, Nimba, Rivercess, and Sinoe. These training activities were carried out in collaboration with the Ministry of Health (MOH) and the World Health Organization (WHO).

The Phebe School of Nursing Rural Training Institute (Phebe) located in Suakoko, Bong County, received a sub-award and technical assistance from the ETP&SS program to implement the Post-Basic Mental Health Clinician Training Program for two cohorts of students comprised of mid-level health workers (i.e., Registered Nurses, Physician Assistants, and Registered Midwives). The aim of this program is to train, graduate, and certify into practice Mental Health Clinicians, recognizing the limited availability of mental health services for both the EVD survivor population and the general population. The training program curriculum is comprised of six modules, including identifying and treating mental health disorders, psychosocial interventions, and human rights and advocacy. The technical assistance provided by ETP&SS has included support for the recruitment of trainees and the implementation and evaluation of assessment tools. 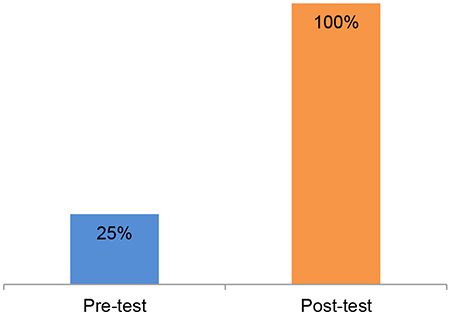 The first cohort of 16 mid-level clinicians completed the Post-Basic Mental Health Clinician Training Program at Phebe School of Nursing in March 2018; this cohort was selected from the four ETP&SS program focus counties: Montserrado, Margibi, Bong, and Lofa. The rationale for targeting these counties was to ensure that counties with large concentrations of EVD survivor communities would benefit by having additional health workers trained in mental health care. The second cohort of 22 clinicians began in February and will end in July 2018. For the selection of these students, Phebe expanded the geographic scope to all 11 EVD-affected counties.

In February 2018, two focus group discussions were conducted with eight students from Cohort 1 to better understand expectations and experiences, and to provide recommendations for future cohorts. Program staff used this data in tandem with quantitative student assessments to provide targeted suggestions for Cohort 2 refinements (e.g. review sessions for key modules, training of facilitators). The student assessments showed that the program was highly effective, with a 300% increase in pass rates between the initial and final assessments during Cohort 1 (25% to 100%). 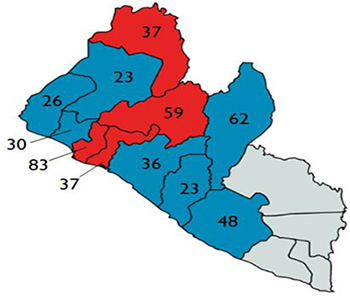 The Ministry of Health of Liberia, with assistance from the World Health Organization (WHO), developed an “Ebola Survivors Clinical Care Guidance” handbook to promote quality of care and adherence to infection prevention and control (IPC) protocols. Recognizing that the clinical care guidance was not being rolled out to frontline health workers, ETP&SS drew from its experience developing training materials tailored for the Liberian workforce and adapted the clinical care guidance into a practical, modular training curriculum. A series of three-day trainings on this curriculum were conducted with 464 mid-level health workers (e.g. Physician Assistants and Registered Nurses and Midwives) from 75 facilities in 11 EVD-affected counties in Liberia between September and December 2017.

In January, ETP&SS rolled out a training exercise based on a monthly mentorship package for previously trained mid-level clinicians working at the eight target facilities. To date, there have been 40 mentorship visits (one visit per month to each of the eight facilities between January and May). While at the facilities, ETP&SS staff collaborated with County Health Team and District Health Team representatives to administer assessments on the guidelines and to provide targeted, one-on-one mentorship to solidify and improve knowledge gained during their earlier coursework. Over the course of the mentorship period, there was a 67% increase in assessment scores, showing both the necessity and value of follow-up mentorship after skills training.

In collaboration with the Liberia College of Physicians and Surgeons (LCPS), the program recruited four sub-specialists, focusing on ophthalmology, rheumatology, and psychiatry, from West and East Africa. Through rotations at target health facilities, the specialists provided out-patient clinical care to Ebola survivors and general population patients, as well as clinical training and mentorship to health professionals working in the facilities. Figure 4 illustrates cumulative clinical sub-specialty training figures. Over the course of the program, 640 providers were trained in the three specialty areas (328 in rheumatology, 87 in ophthalmology, and 225 in psychiatry), and over 3,500 patient visits were conducted in sub-specialty services generally unavailable in Liberia, such as cataract surgery and psychiatric evaluations (shown in Figure 4).

Two faith-based hospitals, ELWA and St. Joseph’s Catholic hospitals, received sub-grants from ETP&SS to provide services to Ebola survivors, resulting in over 1,700 facility visits by survivors during the life of the program. Over the life of the program, there was a 309% increase in survivor registrations; 419 survivors are currently registered to receive services at the two facilities, representing 22% of the estimated survivor populationiv. To better understand the patient experience, exit interviews were conducted with 42 randomly selected survivors who had recently sought care at the two facilities. Nearly all (95%) of survivors reported respectful community by facility staff, and 88% rated the services as good or very good. Survivors overwhelmingly (95%) reported that they would return to the facility the next time they are sick.

The ETP&SS program’s mix of capacity building and health care service delivery interventions have strengthened the health workforce and made a broader range of services available to EVD survivors and the general population. These interventions have contributed to the EVD survivor population developing a greater sense of confidence in the health system’s ability to provide quality, respectful care.

The key rationale for prioritizing these interventions was the value of blending practical, tailored capacity building interventions with expanded medical and mental health care service delivery. Through this mix of interventions, survivors have better access to services and increased confidence in the services provided, which we believe will lead to a sustained increase in the utilization of services. The EVD survivor community, as well as the general non-survivor population, will continue to benefit from the investments made by ETP&SS on provider training and mentorship for health conditions that disproportionately affect survivors.

i This case count includes all suspected, probably, and confirmed cases.
ii 2014-2016 Ebola Outbreak in West Africa. Centers for Disease Control and Prevention.
iii The total number of survivors registered by the Ministry of Health in Liberia and included in the National Ebola Survivor Care and Support Policy is 1,558. Estimates prepared by other key stakeholders range from 3,300–5,000.
iv Estimate based on Ministry of Health data and a county-wide survivor mapping exercise completed by program in mid-2017.