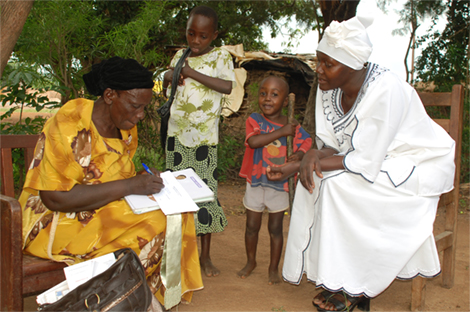 Family planning (FP) programs, including community-based FP (CBFP) programs, are placing heavy emphasis on the provision of a full range of FP methods as a key aspect of quality programming. This underscores the need to create strong referral systems from community-based services to higher level facilities for methods that are not available locally, such as long-acting and reversible contraception and permanent methods (LARC/PM). However, evidence is limited on the most effective, cost-efficient, and scalable ways to refer women to facilities or higher level providers, highlighting the need for strong and clear evidence on referral systems for CBFP. Ensuring that women can access the family planning (FP) methods they want at the time that they need them is essential to decreasing unintended pregnancies. The ability of community health workers (CHW) to provide a range of FP methods at the local level is largely determined by national-level FP guidelines, and as such, the contraceptive method mix in many countries is dominated by short-acting methods.

This situation analysis aims to review the evidence on current models of community-to-facility referrals for LARC/PM, to provide recommendations on promising models that should be tested for effectiveness, and to provide an agenda for future research.

This situation analysis consisted of two phases: 1) a review of existing peerreviewed literature and 2) interviews with key informants.

The authors conducted a literature review to identify programs that successfully linked community-level services to higher level services available at health facilities. The literature on referrals, especially for CBFP referrals, is minimal. In the absence of a large evidence base for CBFP referrals, evidence from other health sectors was documented and lessons were applied to CBFP. An initial search in three databases using targeted search terms yielded 278 abstracts, 86 of which were considered relevant and underwent manuscript review; 19 of these were eligible for final inclusion. Secondary searching yielded an additional 12 potential sources, of which two were found relevant. A total of 21 manuscripts were included in this review.

The authors held key informant (KI) interviews with program managers, implementers, and researchers identified through the literature review; snowball sampling was used to identify additional KIs. Interviews were conducted either by phone using a semi-structured interview guide, or through e-mail using a similar questionnaire. Sixty-five people representing 27 organizations were contacted and 42 people representing 19 organizations participated in the KI interviews.

Data from the literature review and the KI interviews were analyzed using an inductive approach in which themes were pulled from the data. Five distinct referral models were identified - verbal, paper-based, paper-based plus, mobile-phone-based, and facilitated—and a taxonomy of referral systems (Table 1) was developed as a framework to organize and classify the results. The evidence was rated by four important aspects of community-based programming—use in programs, effectiveness, cost, and scaleability – and then each referral model was ranked by author consensus in comparison to the other models. (Table 2)

* This model was originally described by Winch et al. (Winch et al. 2005) and has been adapted for the purposes of CBFP.

Summary of the Evidence

The evidence is summarized by referral system type. The relative merits and drawbacks of each system are discussed below. 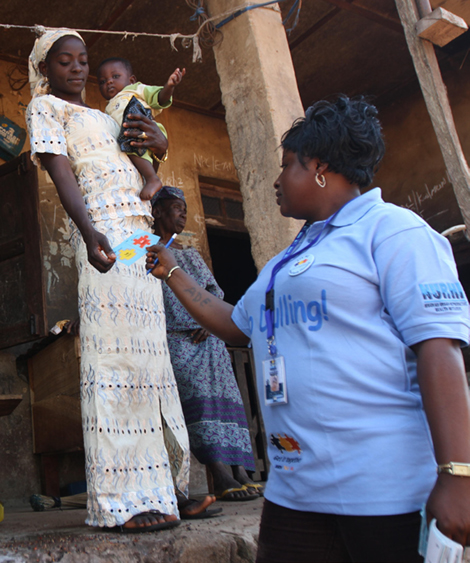 The simplest model of referral to implement and scale up is the verbal referral. This model relies on CHWs being informed about health resources available beyond their scope of care and telling clients where to go to receive additional services. This model is the least expensive to implement because very little training is needed and no printing of materials is necessary; however, despite the high use of verbal referrals in programs, this model is very difficult to document because there is no paper trail to follow. The authors found only one example of this model in the literature (Ali et al. 2001). Based on the limited evidence, it is difficult to draw conclusions on the efficacy, cost, and scalability of this model.

Similar to verbal referrals, paper-based referrals are common in practice but not well documented in the literature. Programs usually train CHWs to use referral slips to direct clients to a facility that can provide the chosen FP method. The authors found five examples of paper-based referrals (Chinbuah et al. 2013, Newbrander et al. 2012, Tumwebaze et al. 2012, Wando, Bainomugisha, and Nerima February 2015, Mackay September 2014). This system is relatively inexpensive to implement, but distribution issues and limited paper supplies can make it difficult to provide CHWs with an adequate stock of referral slips. The data are limited and do not suggest that this approach is cost-effective. Considering the lack of strong evidence, paper-based referrals are likely not the best investment for CBFP programs.

Paper-based plus referrals are a paper system with an additional component that typically includes followup between the CHW and the client to determine the outcome of the referral. The authors found 11 documented examples of this referral model (Ansah Manu et al. 2014, Chanda et al. 2011, Darmstadt et al. 2010, Diatta October 2014, Jumbe October 2014, Juya February 2015, Muhia, Wapangana, and Patel November 2014, Onuoha October 2014, Owais et al. 2011, Ribaira and Chua-oon January 2015, Riwa, Lusiola, and Joyce 2013). This model is stronger than strictly paper-based models because it ensures follow-up with clients, encourages referral compliance, and determines the outcome of a referral. However, the literature revealed notable variation in the referral completion rates, providing mixed evidence for this model's effectiveness. Furthermore, this model relies heavily on CHWs to follow up with clients or vice versa or both, which can put unreasonable demands on the time of often overburdened CHWs and clients. The paper-based plus model is relatively inexpensive to implement, but the literature does not present clear evidence of the model's success. Programs should be designed carefully with the local context in mind and tested for efficacy before scale-up.

Mobile referrals have relatively robust documentation in the CBFP literature, and the evidence base on this model's effectiveness is growing. The authors found 11 documented examples of relevant mobile phone-based programs (Buchner et al. 2014, Campbell November 2014, Campbell et al. 2014, Charurat and Blanchard October 2014, Cohn and Xiong 2012, Layer October 2014, L'Engle and Lasway October 2014, L'Engle et al. 2013, Schuttner et al. 2014, Shattuck, Mattingly, and Sears September and October 2014, Soe November 2014, Vahdat et al. 2013). The systems documented in the literature had diverse capabilities; some allowed users to search for clinics by the type of FP services provided, while others created networks of health care providers and allowed for cross-referrals. Mobile systems have the advantage of being cost-effective to implement and scale up; however, start-up costs can be high to set up the technology and to purchase mobile phones for CHWs. The strong evidence base for the effectiveness of mobile referrals shows that they provide efficient and effective linkages to services and facilitate client tracking and follow-up; while the start-up costs may be higher, the investment is well worth it.

Facilitated referrals, while shown to be effective in child survival programs, are minimally documented in the literature for CBFP. However, the relevance of this type of referral system to CBFP is limited because child survival programs often use diagnosis, treatment, and referral algorithms to guide treatment decisions and rate the urgency of the child's care needs. The authors found four examples (pulled together from multiple references) of facilitated referral systems from the community to a health facility (Andersen et al. 2013, Azim January 2014, Bulto January 2015, Fesseha February 2015, Gill et al. 2012, Gill et al. 2011, Last Ten Kilometers Project (L10K) July 2012). This resource-intensive approach is not cost-effective for CBFP because of the extensive labor and human resource requirements. Although facilitated referrals may have effective applications in child survival programs, FP programs generally do not carry the same level of urgency and thus this type of referral proves to be more complex and expensive than is necessary for successful CBFP referrals.

Table 2. Ranking of Referral Systems by Evidence Base

*Program use is increasing rapidly

Based on the available evidence, of the five referral models outlined above, mobile referral systems are by far the most innovative and promising. The evidence base for mobile technology for frontline health workers, such as CHWs, is growing and continued investment in developing and testing mobile applications specifically designed to be used in FP programs is highly recommended. Despite all the capabilities of mobile technology, it is important to note that mobile technologies can have high initial costs and that managing the technology may require additional training.

Where FP referral programs are already being implemented, programs should document the successes and weaknesses of the programs to build the evidence base for this important area of FP services. Programs will be more successful in the future if they are able to use a strong evidence base to develop and implement the most appropriate program for the local context.

This situation analysis indicates that more research is needed to determine the most effective, cost-efficient, and scalable models of referrals for CBFP. Where large-scale, resource-intensive research is not feasible, program managers should consider evaluating ongoing programs or conducting small comparative studies when possible. Research should also be conducted on the adaption and application of referral models from health sectors other than FP to determine their efficacy in this sector. Even though the main objective of a referral is to get clients to the services they need, tracking of referrals to determine the completion rate is uncommon. Research is needed on the best way to track referrals and on the model of referrals that leads to the highest completion rate.