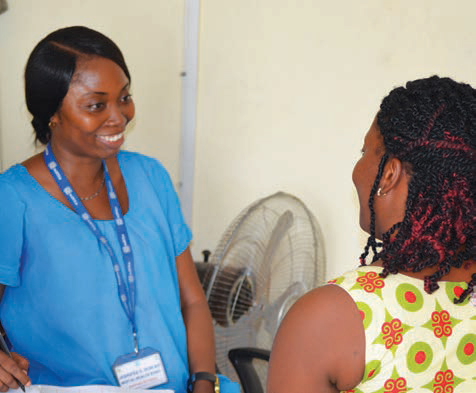 Jennifer Duncan is a mental health nurse at Connaught Hospital.

When the Ebola virus disease (EVD) outbreak hit Sierra Leone in 2014, mental health (MH) services were lacking across the country despite a legacy of MH problems, many of which stemmed from the civil war years earlier (1991–2002).

Every person infected with EVD during the 2014–2016 outbreak in Sierra Leone was traumatized in one way or another. People were told there was an extremely high mortality rate from this incurable disease. Those admitted to treatment units were isolated from their communities, cared for by people they did not know and whose faces they could not see, and witnessed the deaths of family and friends.

After discharge, many EVD survivors experienced stigma and isolation, as well as longer-term health problems that impeded their ability to return to their communities and maintain their livelihoods. In the wake of these experiences, many survivors faced episodes of grief, stress, depression, anxiety, and difficulty sleeping, similar to what was seen during Sierra Leone’s post-war period.1

This occurred in a country where a systematic needs assessment2 conducted by the Ministry of Health and Sanitation (MOHS) in the immediate post-conflict period (2002) revealed prevalence rates of severe depression (4%); severe substance abuse (4%); psychosis (2%); mental disability (1%); and epilepsy (1%); and where by 2012 700,0003 people were estimated to be affected by severe/significant MH problems.

“I do ongoing psycho-education, trying to help patients and their relatives understand that mental illness is an illness, but that there is treatment. I try to help people understand that they should not stigmatize people.”

With only two psychiatrists and 19 mental health nurses (MHN), Sierra Leone has an extremely limited ability to diagnose and treat MH conditions. Further, an overall poor understanding of MH conditions and limited MH training and education in the health workforce have contributed to high levels of stigma toward MH patients and services. Estimates suggest that less than 1 percent of people who need treatment are actually accessing it. From community- to tertiary-level care providers, there was a need to raise awareness of mental health issues that EVD survivors might face, as well as ensuring that specialized care was available.

The United States Agency for International Development (USAID)-funded Advancing Partners & Communities (Advancing Partners) project, through the Strengthening Health Services Post-Ebola (SHSPE) program, works in coordination with the MOHS, the World Health Organization (WHO), King’s Sierra Leone Partnership, and the War Trauma Foundation to build the capacity of the overall public health system to provide high-quality evidence-based MH services at every level of care in a compassionate and non-discriminatory manner.

The MH system in Sierra Leone comprises formal and informal structures to promote, restore, and maintain the MH of the population. However, these structures lacked coordination, which limited the nation’s ability to treat mental health holistically. This shortcoming was evidenced by several instances of duplicated efforts and discrepancies in approaches for similar interventions during the Ebola outbreak.

It is against this backdrop that the MOHS developed a strategic plan for MH services that sought a multi-level coordinated approach to 1) improve community awareness; 2) build demand for services; and 3) improve service provision via specialized healthcare workers at the various levels of care, from communities to tertiary hospitals (see Figure 1). 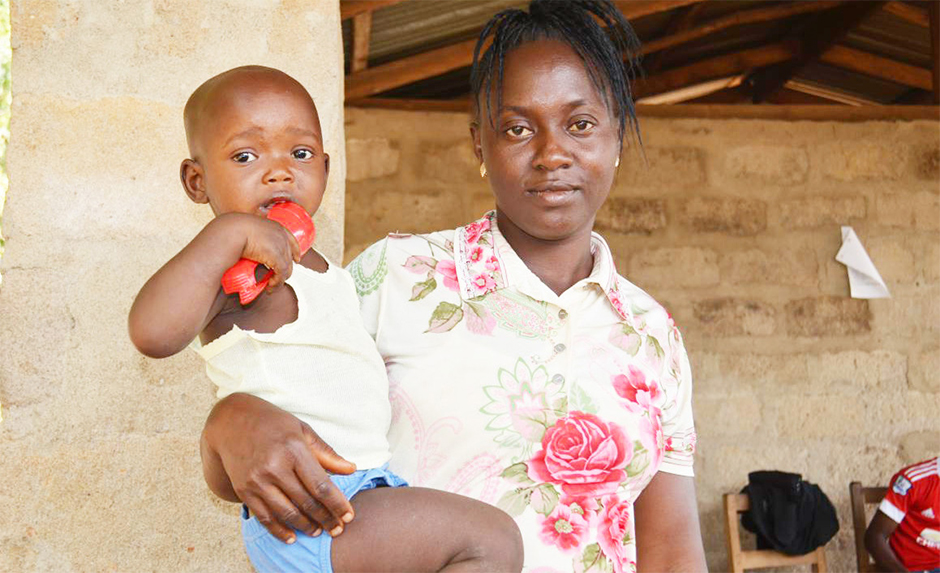 Taiwan’s husband passed away because of EVD. She attended the CHD in Kailahun District, which helped her reunite with her family. 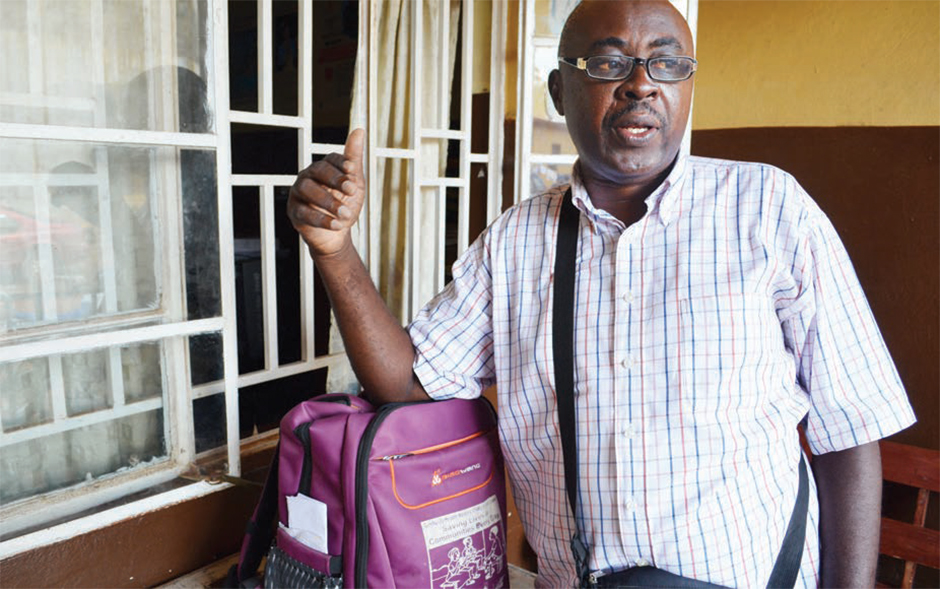 “A lot of people with MH issues can be seen as troublesome and aggressive. Once I got closer and understood the situation, MH patients felt calmer and people in the community began understanding they had a health condition that needed to be treated”

During this period, communities reported that the sessions gave them a better understanding of how peoples’ experience during recent crises (Ebola, mudslide, and flooding) effected MH issues; and that the groups helped members identify individual and community solutions to reduce the number of cases reported to the community chief. In a few districts, groups began saving schemes and used funds to support members when problems arose.

Training CHWs, who are key health promoters, also helped the program’s efforts to improve MH awareness and reduce stigma, and to facilitate referrals to health facilities. In collaboration with the MOHS, the program designed training materials and a job aid (see Figure 2) and supported MH training for CHW peer supervisors in every district, who in turn were responsible for cascading the training and distributing job aids to CHWs at monthly meetings. Advancing Partners supported the roll-out of the training to 1,359 CHW peer supervisors nationwide and helped the District Health Management Teams to cascade trainings to CHWs. 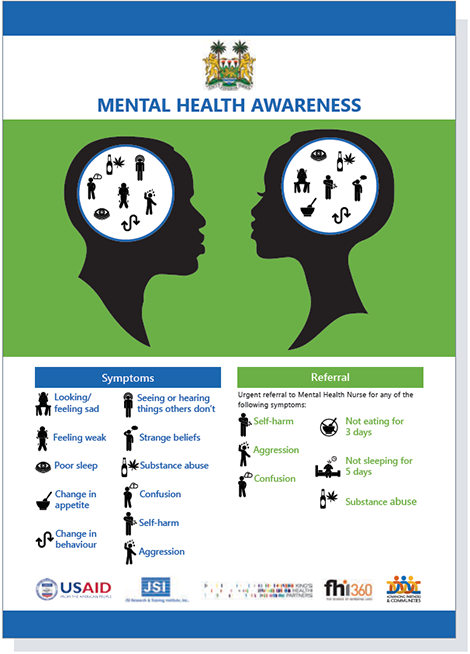 Recognizing that increased awareness of MH at the community level can lead to greater demand for MH services, Advancing Partners collaborated with WHO and the War Trauma Foundation to train healthcare workers at peripheral health units (PHUs) in psychological first aid (PFA). Skills learned at this training have enabled staff to recognize distress symptoms in themselves and in patients, manage basic counseling, and refer to higher levels of care when appropriate. The training, part of a research study led by the War Trauma Foundation, targeted over 400 healthcare workers from 120 health facilities in the six priority districts. The aim of the study was to understand how training in PFA influences skills, knowledge, and healthcare workers’ behaviors. Prelimnary findings from this study showed that health workers who took part in the training demonstrated an increase in knowledge of how to respond to a person in distress compared to those who did not participate.4

Advancing Partners collaborated with the MOHS and WHO to develop an algorithm to help healthcare workers at PHUs decide whether a patient should be referred to a higher level of care for MH problems (see Figure 3). 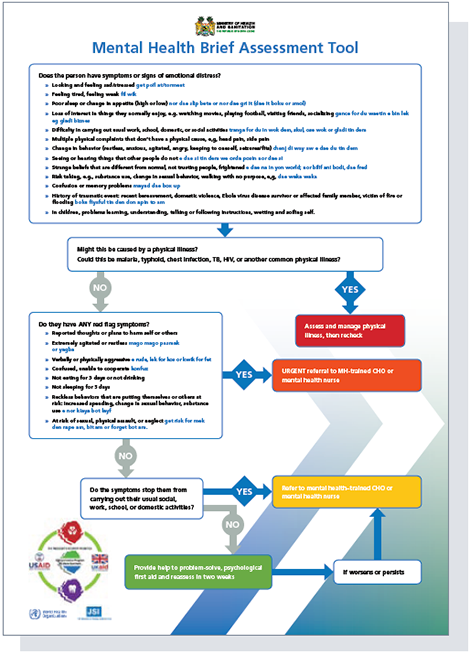 The program provided continuous mentorship and professional development (CPD) for 19 MHNs in the district hospitals to ensure that quality standards for services provided at the MH clinics were met. The program also encouraged MHNs to raise MH awareness among colleagues who do not specialize in this area. Through training sessions across the country, 295 were reached.

Hospitals across the country received specialized drugs, donated by USAID, for MHNs to treat EVD survivors and other groups within the Free Health Care Initiative (pregnant women, lactating mothers, and children under five years of age).

Advancing Partners supported the MOHS to strengthen the policy framework to integrate access to high-quality MH services at all levels of care. In cooperation with WHO, Advancing Partners assisted in the development of the MOHS National Mental Health Strategic Plan (2018–2021); and urged the Nursing and Midwifery Board to support the official recognition and accreditation of MHNs within the MOHS system. Further to the accreditation, the program worked with the College of Medicines and Allied Health Sciences to develop the first post-graduate menta l health diploma course, which will be critical for providing long-term specialized MH care in Sierra Leone.

With attention to each level of the public healthcare system, Advancing Partners enabled opportunities for vulnerable populations, such as EVD and civil war survivors, to access MH services. This has improved access to MH services for the general population as well.

At the community level, the program reached almost 700 people through the CHDs and contributed to the establishment of a model that can continue to strengthen community resilience to shocks. Advancing Partners has sensitized about 14,000 CHWs across the country, increasing MH awareness and improving public health sector capacity to recognize MH problem signs and symptoms and refer when needed. This resulted in an increase in the utilization of MH services. Between 2015 and 2018, there was a significant increase in the average monthly MH consultations from 66 to 176 (a 267% increase) across the 14 MH clinics within district hospitals.5

In addition, healthcare workers showed a significant reduction in negative attitudes toward MH. When tested through the Mental Health Clinician’s Attitude (MICA),6 a self-administered instrument that assesses clinicians’ attitudes about psychiatry and people with mental illness, the attitudes of MH nurses improved, with stigmatization decreasing from 44.4 (February 2017, pre-CPD) to 36.5 points (May 2018) on a scale that ranges between 16 and 96 (96 being the highest level of stigmatization).

An assessment conducted in May 2018 showed a decrease in perceived stigma by EVD survivors accessing care at health facilities. Although this result cannot be fully attributed to Advancing Partners’ interventions, only 3.9 percent of the interviewees reported being denied services because of EVD status, as opposed to 16.9 percent at baseline. Only 5.8 percent said that a healthcare worker spoke poorly about them (19.7% at baseline); and 2 percent reported that a healthcare worker disclosed their status without permission, compared to 22.3 percent at baseline. Yet, despite the various interventions that the program implemented to improve access to specialized MH services, EVD survivors reported facing some level of anxiety and depression (42.3% and 46.6% respectively), indicating the need to continue supporting the MH sector.

Lastly, capacity building and the continued CPD of MHNs has revealed that the country is more resilient in a crisis situation than in the past. During the Freetown mudslides that killed more than 500 people in August 2017, the MHNs deployed immediately and provided more than 2,000 counseling sessions to people in the most affected areas.

In conclusion, while Advancing Partners’ primary focus was on EVD survivors, it was quickly understood that the mental health needs were far wider, and that it was important to have a holistic approach to integrate activities into the broader national health system.