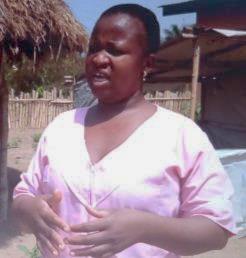 In-charge at Rofoindu MCHP, Emma Kamara, outside the facility.

Rebuilding public trust in Sierra Leone’s health care system remains a challenge as the country grapples with the aftermath of the Ebola virus disease outbreak that killed nearly 4,000 people in this small country of 7 million people.

Alpha P. Conteh is the secretary of the Facility Management Committee (FMC) of Rofoindu village in the northern district of Port Loko. He recalls the lack of trust and knowledge among community members in giving birth at a health facility: “Our mission was to encourage mothers and pregnant women to seek treatment at the facility. At first, it was daunting and almost impossible to achieve […] but, with perseverance, and hard work, the situation started to change,” says Conteh.

Facility attendance had dwindled dramatically during the Ebola crisis, particularly for women and children, as described by the in-charge at Rofoindu Maternal and Child Health Post (MCHP), Emma Kamara.

“Home delivery was a difficult situation that we had to find ways of dealing with after Ebola. There were lots of home deliveries conducted by traditional birth attendants and other family members. In the process, some encountered complications because they were not delivered by trained and skilled staff.”

With support from the United States Agency for International Development (USAID), the Advancing Partners and Communities (APC) project, through JSI Research & Training Institute Inc. (JSI) and partner FHI 360, worked with its implementing partners to revitalize and establish Facility Management Committees (FMCs) in 213 facilities in five districts.

"Home delivery was a difficult situation that we had to find ways of dealing with after Ebola. There were lots of home deliveries conducted by traditional birth attendants and other family members. In the process, some encountered complications because they were not delivered by trained and skilled staff.”

As a link between villagers and facilities, the FMCs represent a sustainable community ownership approach to ensure community participation and involvement in health facility management and operation. The Rofoindu MCHP provides medical services to approximately 3,179 people from 12 catchment communities/villages. The Rofoindu FMC, fondly called “Munafa,” which means “success," has 15 volunteers including the town chief Mr. Sallieu S. Kargbo, six women, and nine men, who provide health service support to the facility and to people in the community.

In order to dissuade pregnant women from delivering at home, the FMC embarked on a series of community engagement meetings immediately after the FMC was formed with APC’s support in March 2016. During the meetings, they discussed the dangers of home deliveries, as well as the benefits of women visiting the facility during pregnancy.

Questions about patients contracting Ebola at the facility were addressed during some of the meetings, which helped to influence people’s decision about visiting the health post. The FMCs, village development committees, and the local chiefs worked together to inform the population about the benefits of facility deliveries, and institute a bylaw that prohibits home deliveries—which helped to influence attitudes towards use of the facility.

This is confirmed by Emma, the in-charge, who reports: “home deliveries are now punishable by a fine of Le 50,000 for a pregnant woman delivering at home and Le 50,000 for whoever conducted the delivery.” Emma added that the FMC community dialogues and the bylaw have served to encourage people to visit the facility.

Emma is grateful for USAID’s support in establishing the Munafa FMC. She observes that the FMC members constantly clean up the facility and clear bushy roads connecting the MCHP to other villages. This, she said, makes the health center more appealing for women and children to visit. 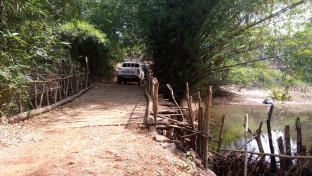 Bridge built by the community for access between Rofoindu MCHP and the city.

Furthermore, FMC secretary, Mr. Conteh, underlines that the FMC work resulted in mobilizing community members to construct the only bridge that connects Rofoindu MCHP to the city. He says this has improved accessibility to the facility, as well as enhanced easy delivery of medicines and medical supplies.

Through community interventions, the FMCs are able to better connect the communities and the health facility. This is reflected in a higher facility usage overall in the last year: the total number of outpatient visits increased to 3,086 in calendar year 2016 from 915 in 2015, and the number of deliveries went up to 172 in calendar year 2016, from 105 in 2015.

“Before the formation of the FMC, the facility attendance rate was low [for women and children] for the whole year. But today, the effort of FMC members has enabled the health center to record higher numbers of deliveries at the facility” the in-charge, Emma, echoes.

This great work from the community, Emma said, is key in helping the facility achieve success in making it safer for women to give birth.