Sound and Sustainable Improvements to Infrastructure and Services in Liberia 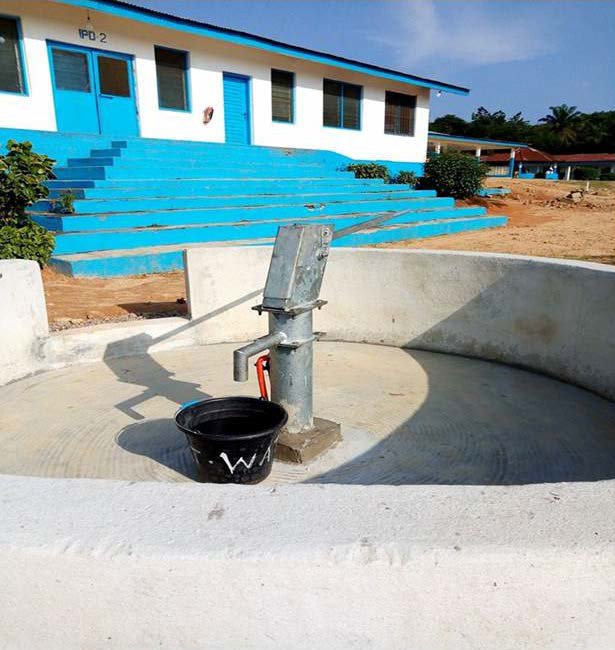 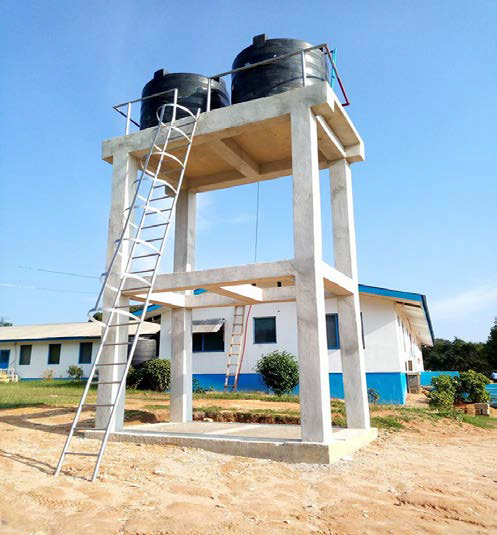 APC/ETP&SS addressed specific infrastructure improvement needs at each of the six facilities. The improvements included ensuring safe water supply where it was lacking, a perimeter wall to improve infection prevention control (IPC) adherence and protection of lives and property, upgrading physical infrastructure, and supplying new equipment.

Two sets of assessments were conducted at each targeted facility. The first, conducted in November 2016, was an overall infrastructure assessment to determine general needs at the facilities. The second set, conducted between December 2016 and January 2017, was a detailed assessment to establish the extent of the work needed.

Contracts were awarded through a competitive bidding process that evaluated each bidder on two separate sets of criteria. The criteria were used to evaluate the technical and cost proposals of each bidder. The most responsive bidder was then selected for contract award. In cases where the work required specific skills, a sole-source justification was established showing why the firm/company was most suited to perform the tasks.

Infrastructure improvements began in earnest in September 2017, with the award and signing of the first two contracts for the renovation of the Redemption Hospital Emergency Triage and Eye Clinic in one contract, and the renovation of the Tellewoyan Hospital Laboratory and the Dolo Town Health Center perimeter wall in the second. Contracts were signed between JSI and two local contractors for the execution of these works. 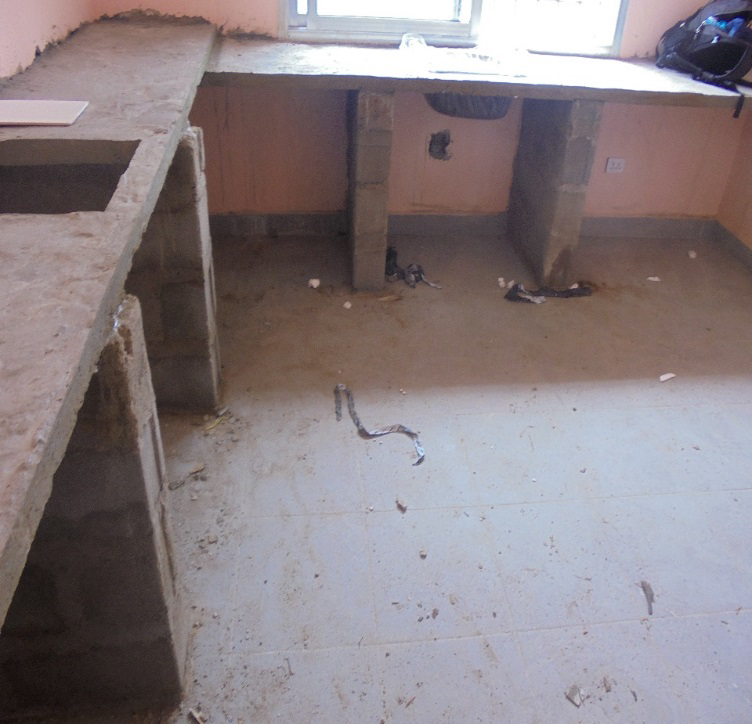 The existing Redemption Hospital Emergency Triage Unit was temporary and made of tarpaulins and wood panels. It was transformed into a permanent structure with ceramic tile-surfaced masonry walls and sliding glass window panels, the partitioning of a short-stay room to assist the emergency ward, and rehabilitating damaged bathrooms and toilets in the triage area. The eye clinic was also renovated and extended to include a small fully air-conditioned surgical room supplied with new ophthalmological equipment.

Tellewoyan Hospital Laboratory in Lofa was fully restructured and supplied with modern equipment. The lab now has separate sections for chemistry, microbiology, blood bank and collection, specimen collection, refurbished bathrooms, and a new roof and ceilings. These improvements transformed not only the physical structure but service delivery as well.

Dolo Town Health Center in Margibi County received improvements in IPC adherence with the construction of a perimeter wall around the entire property. The wall created an triage system for people entering and exiting the facility. It also improves security by thwarting theft, which had been a recurring problem. 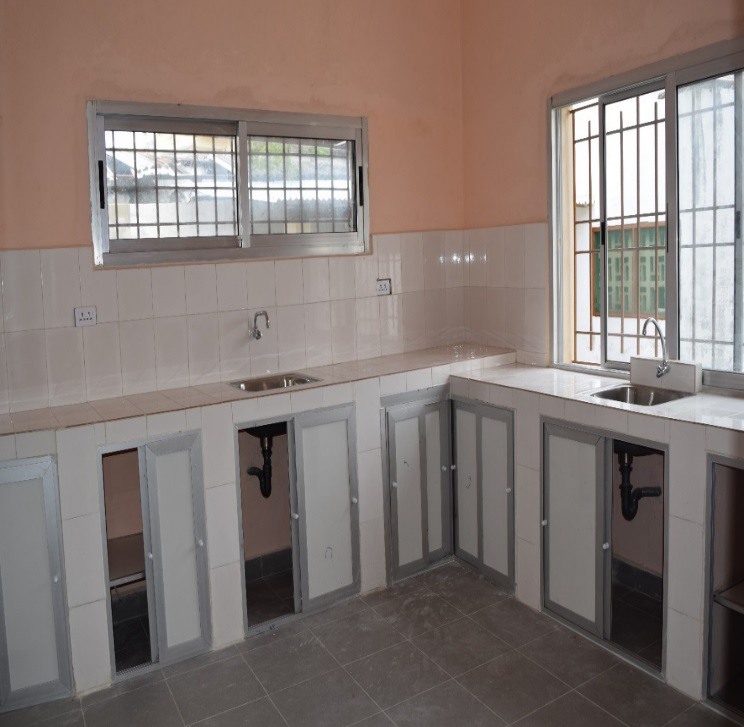 In April 2017 the process for the provision of safe drinking water at the Kolahun and Foya Boma Hospitals began with geophysical surveys to determine the possibility of providing year-round safe drinking water at these facilities. The survey results showed that it would be difficult or impossible to drill a borehole at Foya Boma, but there was good potential for safe water at Kolahun. The outcome was a 90 meter borehole at the Kolahun Hospital, with a 0.833 liter per second yield, estimated at 3,000 liters per hour. This is enough to supply Kolahun with water throughout the year. It is a tremendous achievement because it shifted the water source from collection from a nearby stream, to a protected potable solar-powered water source and supply system.

In addition to the borehole, a water tower was constructed and equipped with two 5,000 liter poly tanks that are supplied by a solar-powered submersible pump system. The system is fully functional and the hospital administration is grateful to USAID and JSI for providing an increased supply of safe drinking water. Finally, the contractor provided training to the Hospital Water and Sanitation Team so they can manage the system.

After the Kolahun Hospital water situation was settled, APC searched for a solution at Foya Boma Hospital. Because of the limited potential for a successful borehole, APC designed and developed two systems—a potable water system and a rain water harvesting system. The potable water system uses a newly created shallow and protected hand-dug well that has a solar-powered submersible pumping system to supply a 5,000 liter tank mounted on a rehabilitated water tower.

Because of the limited potable water available from the well, a separate system was created to provide water for cleaning and washing. Rain collection gutters supply water to a 90,000 liter glass reinforced plastic tank through a system that allows filtered water to be collected and stored in the tank. This water is used for domestic washing and cleaning purposes to supplement water collected from the solar-powered potable water system.

A more significant infrastructure improvement at JFK Hospital in Monrovia resulted in the complete renovation of the JFK Chest Clinic. The building was gutted and reconceived as the JFK Medical Center Outpatient Infectious Disease Clinic. This renovation, which began in March 2018, added work space; improved toilet facilities; increased the number of consultation and counseling rooms; improved the laboratory; and created a drug store, lounge, and furnished dressing room for staff. The new building has a functioning water system connected to the hospital’s water supply lines.

The infrastructure improvements brought massive changes to the physical structures and service delivery at each of the six targeted facilities. This has brought immense relief not only to the facilities themselves but also to the communities that they serve. At Redemption and Tellewoyan Hospitals, structural repairs and modern equipment have improved service delivery. At Dolo Town Health Center, structural changes improved patient flow and triage, and have increased security of the facility and its staff. JFK’s redesign and renovation improved service delivery for infectious disease control and treatment. Kolahun Hospital now has a fully functional solar-powered potable water system. At Foya Boma Hospital, which struggled with an insufficient water supply, a new potable water well with a solar-powered submersible pump and a new rain water harvesting system provide water year-round.

USAID approval was required before renovations could be undertaken. This caused delays, as did delays by contractors during the course of the renovations. On occasion work had to be redone to meet design and specification requirements. The length of contract time also limited the scope of the improvements and in some cases required requests for extensions.

Overall, this work was sorely needed and has improved the experiences of staff and patients alike. The renovations and new structures and systems will also extend the lives of the facilities and improve the quality and quantity of the services provided to the communities. These efforts have brought commendation to USAID and JSI from the County Health Teams, facility administration and management, and most importantly, the communities that benefit from the improved health care services.